Alzheimer’s. Diabetes. Parkinson’s disease. Have you ever wondered whether one factor is the cause of all these maladies? Well, it just may be circadian rhythm disruption.

Researchers have found that with today’s lifestyles of working long hours inside buildings and coming home to sit in front of the television, the lack of access to natural light causes adverse effects on the body, such as disrupted sleep patterns, stress, mood swings and lowered immunity. Prolonged periods of sleep disruption can contribute to more serious consequences, such as an increase in plaque deposits in Alzheimer’s, abnormalities in pancreatic cells that hinder the body’s ability to release insulin, and a decrease in motor skills in Parkinson’s.

But there is one company looking to change our mole-like existence—Photon Project Ltd. The company recently initiated the Photon Project, which was started by glass engineering specialists at Cantifix, Ltd., in order to study the effects of light on humans. The company is teaming up with others who are interested in circadian rhythm research such as scientists, industry professionals and government agency representatives. The study will contribute to research being conducted by Professor Russell Foster, FRS, FMedSci, who teaches circadian neuroscience at Brasenose College at the University of Oxford. 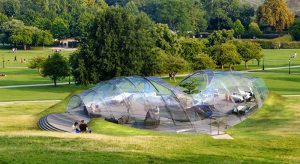 The Photon Project will include building communities of Photon Pods, which are all-glass structures in which people will live and work and will give scientists the opportunity to study the positive effects of natural light on the human body including health, mood and behavior. Many people use light therapy to treat seasonal affective disorder, which is a type of depression that usually occurs during autumn or winter. However, with the use of the pods, light therapy can be delivered year round.

The pods are transportable and designed to be built in less than four weeks. The glass can be switched from transparent to opaque to allow for privacy. The technology behind this innovation is nanoscale particles suspended in a liquid that can be precisely adjusted to control the amount of heat, light or glare that passes through the glass. These precise adjustments can reduce the amount of heat or air conditioning needed to maintain a comfortable space in either winter or summer.

The People Behind the Photon Project

The project aims to provide empirical data to develop new standards for design and architecture that will incorporate elements to bring about positive moods and behavior and will share the study data with one million individuals across a pre-determined worldwide network, in order to maximize the economic and societal benefits. 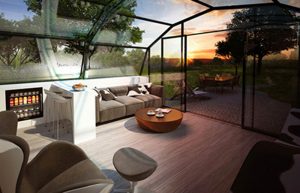 The science behind the project includes chronobiology, which is the study of biological clocks in living organisms and how they regulate and control functions within the organism. Chronobiology is an interdisciplinary field that incorporates techniques and viewpoints from botany, biology, genetics and others.

The traditional view is that the body has a clock in a part of the brain called the suprachiasmatic nucleus, or SCN. When light hits the eye’s retina, it sends a signal to the SCN telling the body whether it is day or night. In turn, the SCN would tell the rest of the body what time it is. But recent studies have shown that, although there is a master clock in the brain, all of the cells in our bodies have a molecular clock that controls their functions and interactions. Therefore, the liver has a clock, as well as the kidney and so on that controls local functions.

On the basis of this scientific evidence of the need for the body to have light, you may find in your future the opportunities to live, work and play in enclosed environments that offer the benefits of the outdoors with the comfort of the indoors. At least that’s the hope of the innovative thinkers behind the Photon Project.