Why Women Have a Harder Time Getting the Sleep They Need

Women are more likely to experience problems with sleep than men. New research suggests that hormonal factors may be to blame for this gender disparity.

Sleep is a universal human behavior, one shared by every person in the world. However, many people in the United States and beyond struggle to get the rest they need for good physical and mental health. Women are particularly likely to be affected by insomnia and a variety of sleep disorders. Scientists have not completely explored the reason for this gender difference, but there appear to be several different factors at play.

A famous book once claimed that men are from Mars and women are from Venus. While we are clearly all from the same planet, women appear to at least function on a different time zone. Women tend to go to sleep later or have trouble sleeping in part because their circadian rhythm is slightly more delayed than that of men. Female circadian clocks tick at a slightly faster pace, leaving women out of sync with a man’s world.

In addition, the circadian rhythms of women appear to be more influenced by stress and external factors. They are also more likely to experience fatigue and low levels of alertness late at night, possibly because of the higher rate of sleep disorders.

Scientists believe that female hormones such as estrogen and progesterone may be part of the reason so many women suffer from sleep problems. Progesterone appears to make women sleepier, while estrogen has the opposite effect. These hormones are essential for female health and fluctuate continuously throughout the month to create reproductive cycles. The result may be a constantly shifting circadian rhythm that never quite settles into a firm routine. Most women also must deal with the sleep-killing effects of pregnancy, breastfeeding and caring for young children throughout their lives as well.

Although women are more likely to suffer from sleep disorders, they need more sleep on average. This mismatch between sleep needs and actual sleep time may be the core reason women’s circadian rhythms are affected more by stress, shift work and other disruptive factors.

Does the Change of Life Mean a Change in Sleep? 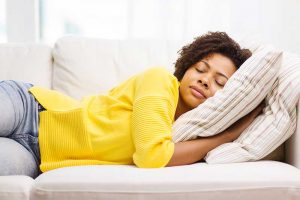 Women do not see an end to their disparate amount of sleep troubles once they hit menopause. Many, in fact, have even more trouble sleeping as their fertile years wane. Estrogen and progesterone both drop sharply at menopause, which can cause a variety of symptoms. Women lose the sleep-enhancing effects of progesterone, which is an adjustment for many. In addition, estrogen’s role in temperature sensing and regulation becomes clear at this time, as many women suffer from hot flashes. Hot flashes disproportionately tend to occur at night, waking many women from sleep and keeping them up much of the night.

There are many gender differences that may be contributing the higher rate of sleep disorders in women. However, sleep disorders are not by any means a female problem. With so many people of both sexes suffering from a lack of high quality sleep, new understanding about how we can get the rest we need will benefit us all.