Cancer research has yielded many new and exciting treatments that improve outcomes by attacking the biochemical processes underlying this serious disease. While melatonin has been used as a treatment for insomnia and other sleep disorders for decades, it may also be a valuable treatment for cancer. New studies suggest that melatonin inhibits tumor growth while lessening the side effects of other cancer treatments.

Melatonin is one of the “busiest” hormones in the human body, affecting a variety of vital cell processes. It aids in cell repair, cues cells to release different hormones as needed and encourages a healthy circadian rhythm, or 24-hour internal clock. Low levels of melatonin have been linked to diseases as diverse as cancer, neurodegenerative disease and even heart attacks.

As humans age, melatonin levels decrease and the incidence of many diseases increases. Is this a coincidence? New studies are showing that low melatonin actually contributes to many diseases associated with aging, and that melatonin supplementation may be an effective preventative treatment.

Age is not the only cause of low melatonin levels. When people are chronically sleep-deprived, as is common in modern society, their melatonin levels become lowered and fluctuate more. People who are not able to sleep normal nighttime hours are at a higher risk of cancer, which is why the World Health Organization considers shift work a carcinogen.

Although the link between disrupted circadian rhythm and cancer is clear, the mechanism of this increased cancer risk was previously unknown. However, a new meta-analysis of chronobiology studies suggests that melatonin attacks cancer at its very foundation, disrupting the biochemical processes by which tumors grow.

Could Melatonin Be the Next Big Cancer Treatment? 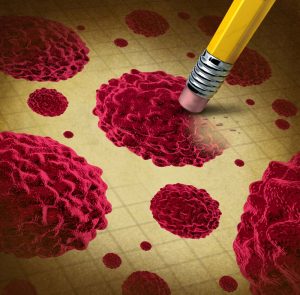 One meta-study in chronobiology looked at previous research on melatonin and compiled a long list of anti-cancer effects. Melatonin can keep cancer cells from proliferating by triggering apoptosis (or programmed cell death) and cutting off the blood supply to tumors. In addition, melatonin is already known to act as an antioxidant and to improve the immune system, which prevents cancer from developing. Last, low melatonin can lead to high levels of cytokines, a natural molecule that has been linked to cancer.

When lab animals with tumors are given melatonin, tumor growth slows significantly. In addition, studies are showing that human cancer patients tolerate other treatments better when taking a melatonin supplement. In the near future, melatonin may become part of a standard cancer treatment regimen.

Researchers in chronobiology and a variety of fields acknowledge the promise of melatonin both to prevent and treat cancer. However, it remains difficult to get funding for studies in this area. Many studies in the United States are performed by corporate interests that will make money from new discoveries. With melatonin already widely available and affordable, there is no financial incentive to study it. Nonetheless, a large and growing number of studies on this multi-tasking hormone are being performed, with new discoveries on the link between circadian rhythm and health being announced almost every week.