Biological Rhythms Are Present Throughout Nature

When researchers talk about biological rhythms, most people assume they are talking about the internal clocks of animals. However, internal clocks are not limited to just mammals.

Have you ever wondered if plants sleep? While this may seem like a philosophical question, researchers in chronobiology may have found the answer. Although modern chronobiology research focuses mainly on mammals, the field was actually discovered when an astronomer named Jean Jacques d’Ortous de Mairan noticed that the leaves of mimosa plants appeared to follow a daily rhythm similar to that of humans. Just as in mammals, plants have distinct biological rhythms and a circadian sleep-wake cycle.

The Biological Rhythms of Plants

All organisms live by internal clocks. D’Ortous de Mairan was not the first scientist to notice biological rhythms in plants, but rather the first to systematically study them. Carl Linnaeus noted that flowers open and close at predictable times even when placed in a dark room. Darwin noted that plant leaves appear to “sleep” at night. While much is known about the circadian rhythm of smaller plants, little is known about the circadian rhythm of trees. A team of researchers from Hungary, Finland and Austria decided to find out more about how trees regulate their internal clocks.

Using laser scanners, scientists recorded the posture of trees throughout night and day. They found that trees seem to slump at night, with both branches and leaves drooping during dark hours. The changes were slight, an average of 10 centimeters, but predictable and tied to the time. These observations held up in a variety of weather and even in different countries. It is not yet clear whether these biological rhythms are set by a cellular clock or by light levels, but trees appear to sleep at night.

The Timing of Flower Scent 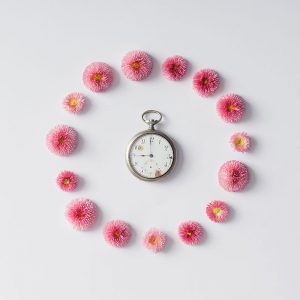 Most people have noticed that flowering plants open and close their blooms according to the time of day. New research suggests that scent also follows a predictable daily rhythm. Volatile organic compounds made by the plant create scent. Because these compounds are volatile, they quickly dissipate into the air and create a distinctive odor that attracts pollinating insects. This is crucial to the survival of a species, so it makes intuitive sense that this process would be tightly controlled.

Genes that create the compounds behind scent appear to be regulated according to time. Plants that make scents time this activity so the scent is strongest when their blooms are open. The DNA activity that produces the organic compounds creating scent is only present when the flower blooms. Because blooming and producing scent are controlled by different sets of genes, there is likely an innate circadian clock timing the processes.

Life evolved on a planet with a variety of rhythms, including days, seasons and even the cycles of the moon. These natural rhythms create different temperature, light and energy input. Biological rhythms developed as a means of coordinating our own activity to the world around us, which is why all life appears to have an internal clock. Understanding these internal clocks will bring us closer to understanding the world around us.