Blue Light Detrimental Before Sleep, but Possibly Beneficial Before Surgery

While the neurological effects of blue light can keep you up at night, they may actually help you recover from surgery.

Between televisions, smartphones, tablets and laptops, blue light is almost ubiquitous in modern society. Ridding your world of screens, even for a few hours before bed, is a challenge for many people. This constant exposure to blue light has negative health effects that have been proven in a multitude of studies. However, new research suggests that blue light may have positive effects on your health as well.

Blue light does not just affect your eyes, but also your brain and thus every cell in your body. When our retinas sense blue wavelength light, they send signals to the suprachiasmatic nucleus of the hypothalamus in the brain. The hypothalamus then signals the pineal gland to suppress production of melatonin, which in turn affects the rest of your body. The most noticeable effect of this signaling cascade is difficulty falling asleep because melatonin is the hormone that signals the body it is time for sleep and many of the physiological processes that occur during this time.

While other colors and wavelengths of light affect sleep, blue light has been implicated as a major source of interference with sleep in modern people. It is recommended that people turn off screens a few hours before bed so their bodies and brains can begin adjusting to the evening and preparing for sleep. 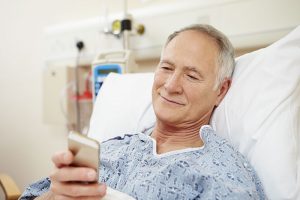 While the effects of blue light on sleep are generally negative, there may be actual benefits to blue light in select circumstances. A new study has found that exposing mice to blue light for the 24 hours before surgery can actually reduce inflammation and even lower the risk of organ damage. It appears to work by reducing the numbers of inflammatory proteins produced by immune cells that perceive surgical procedures as a threat. This is particularly important in surgeries such as organ transplants where even minor inflammation or organ damage can lead to organ rejection and eventually death.

Blue light can prevent sleep more than other colors of light, and it appears to have more effect on pre-surgical patients as well. However, blue light does not appear to be following the standard retinal pathway in this case. Even blind mice have the same improvements after exposure to blue light despite having nonfunctioning retinas. In addition, mice exposed to blue light pre-surgery did not have different levels of melatonin from those who were exposed to light of other wavelengths. Scientists remain puzzled about whether there is a second and unknown way for bodies to perceive blue light and also whether this unknown pathway is present in humans.

Sometimes research creates more questions rather than presenting answers. However, the new questions will open up new areas of chronobiological study that will hopefully add to understanding of how our circadian rhythm can affect our health. For the time being, it appears that using your smartphone or tablet before surgery it not only okay, but actually may have positive health effects.