Cognitive Impairment and Sleep in the Elderly: What You Need to Know

New studies on cognitive impairment in the elderly suggest that sleep-disordered breathing is a risk factor for the mental changes associated with old age.

Up to 50 percent of American adults—a much higher percentage than their European counterparts—report feeling sleepy during the day, thus compromising their ability to perform their jobs, care for their loved ones and even to drive safely. Inadequate rest during the night causes much of this daytime sleepiness, sometimes due to sleep-disordered breathing. Sleep-disordered breathing also may be responsible for some of the cognitive decline seen as we approach old age.

What is Sleep-Disordered Breathing?

Sleep-disordered breathing is a condition in which people do not breathe well while they are asleep, thus subjecting themselves to periods of anoxia, or low oxygen supply. This causes them to wake up repeatedly as their bodies sense low oxygen and go into a state of biochemical panic. There are three main types of sleep disordered breathing: obstructive sleep apnea, central sleep apnea and mixed sleep apnea. In obstructive sleep apnea, the airway closes repeatedly in sleep, causing snoring and repeat awakenings. In central sleep apnea, the brain fails to maintain good respiration due to problems such as a stroke or other brain injury. Mixed sleep apnea involves a combination of these two factors.

Regardless of the type of sleep apnea, people with this disorder will awaken several times a night due to low respiration. Their bodies will sense a lack of oxygen and respond with increased adrenaline, cortisol and other rousing hormones. The result is that these people have very disrupted sleep. They also often suffer from a variety of health problems due to oxygen deprivation, such as pulmonary hypertension and cardiovascular disease. 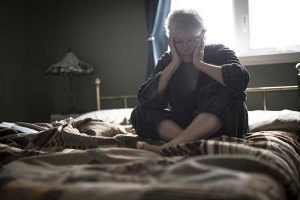 Many elderly people suffer from cognitive decline, i.e. a condition in which they lose the ability to think clearly and easily access memories. This can have a huge affect on quality of life even in people who do not have Alzheimer’s disease or other types of dementia. We have long known that sleep is very important to cognition, with many people who have cognitive impairment also suffering from sleep disorders of a variety of kinds. However, new research suggests that cognitive decline in the elderly may also be linked to sleep disturbances, especially sleep disturbances linked to disordered breathing.

Researchers looked at the incidence of cognitive impairment in elderly people and found that there were clear associations with sleep disorders. Specifically, people who have sleep-disordered breathing are more likely to have difficulties with cognition and memory. The scientists involved in the study acknowledge that there is no clear causation so they cannot tell if sleep-disordered breathing causes the cognitive impairment as senior citizens grow older, or if the two merely occur at the same time. However, the link between the two is especially concerning in light of other studies on sleep and the elderly.

Sleep Throughout Your Lifespan

Sleep changes as we age in ways that leave many elderly people exhausted and in need of a good night of rest. As we become adults, we begin to have less of the restful slow wave sleep that children enjoy in ample amounts. Part of this is due to lower melatonin production. By the time people have reached old age, melatonin production is at a lifelong low. The result is that many elderly people have trouble falling asleep, wake often throughout the night and often do not feel rested. This lack of sleep also has been linked to Alzheimer’s disease and other common types of cognitive decline.

The good news is that sleep disorders often can be treated effectively. For example, elderly people who suffer from a lack of melatonin can benefit from taking a supplement of this hormone before bed. There are also effective treatments for many types of sleep-disordered breathing, such as obstructive sleep apnea. It appears that managing sleep disorders in our aging population is a very important part of helping them lead more comfortable lives.