How Your Brain Registers Summer

There has been a great deal of buzz in the medical community regarding circadian rhythm and its effect on health. However, our bodies are actually controlled by several different internal clocks. While the circadian, or 24-hour, clock is crucial to many cellular processes, new research suggests that seasonal rhythms are just as important.

How Our Brain Senses Seasons

Our circadian rhythms are set by factors called zeitgebers, which are differences in light, temperature and other factors that indicate time. Our body senses these and responds accordingly. In the absence of light, our suprachiasmatic nucleus (SCN) sends signals to release melatonin, which tells the body when it is time to sleep, among other things. Similarly, a slight drop in temperature will contribute to sleeping.

Light levels and temperature both change significantly in the summer. Our brains sense a longer, brighter day along with warmer temperatures and use these as cues for seasonal rhythms. This causes changes in our hormonal systems that enable us to handle the challenges of each season.

Melatonin Throughout the Year 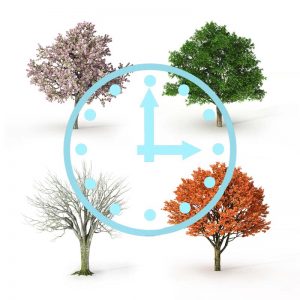 While melatonin is mainly associated with the circadian rhythm, it varies according to seasonal rhythms as well. As night length changes with season, melatonin secretion changes as well. The shorter time period of melatonin production causes changes in hormonal levels and even changes in human behavior. For example, testosterone production increases, making men more fertile in the summer.

In addition, the shorter period of melatonin release tells the body that it is summer, allowing other seasonal physiological changes to occur. Scientists are still exploring the ways that a shorter duration of melatonin affects human behavior and physiology, but it is clear that there are substantial effects.

GABA and the Four Seasons

GABA is an essential neurotransmitter that dictates activity throughout the nervous system. A recent circadian biology study in Japan suggests that it also plays a major role in telling the brain and body that summer has arrived.

The suprachiasmatic nucleus is responsible for regulating circadian rhythm, especially by producing the clock gene Bmal1. However, one area of the SCN is less responsive to environmental cues. As summer shortens the nights, this area becomes out of phase with the rest of the SCN and different levels of Bmal1 are expressed. This gap between the two regions tells the brain that it is summer.

GABA inhibits most neuronal activity, but it actually excites certain neurons in the SCN when chloride levels are high. Chloride levels become higher as the phase gap between the two parts of the SCN widens, which occurs in summer. The increase in neuron excitability is another cue to the brain that summer has arrived.

Cortisol: Stress and Wakefulness in Summer 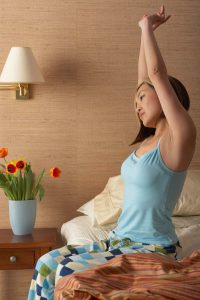 Cortisol is best known as a stress hormone, but it plays a critical role in many important biological processes. It rises sharply at the first light of day to prepare people to wake.

When sunrise time is earlier, which occurs in the summer, median cortisol levels drop sharply, especially morning levels. This may occur to allow people to sleep past an extremely early sunrise, but there are likely other reasons as well. The change in cortisol levels is another indicator to the body that warm weather has arrived.

These may seem like small biochemical changes but they are very important. The human body’s everyday cell behavior, from sleep cycles to hunger to disease processes, are dominated by both time of day and time of year. Melatonin, GABA and cortisol are all important to many cell processes, so seasonal variations likely have more effects than we currently understand. Chronobiology researchers are studying these seasonal changes in several ongoing studies with the hope of someday being better able to treat illness and disease.