Do you get sleepy when you are cold? Researchers have discovered new insights about how temperature affects the circadian rhythm.

The circadian rhythm is a 24-hour cycle that determines when we sleep, when we wake and when our body performs important cell repair processes. This internal clock is set by external cues such as light and temperature. While the mechanism behind light’s effects on the circadian rhythm has long been known, its responses to changes in temperature have remained a mystery. However, researchers have now gained new insight as to exactly how temperature affects the circadian rhythm.

Every living creature has a circadian rhythm. In particular, fruit flies are often studied because they mature quickly, allowing researchers to quickly see the effects of genetic changes. In addition, fruit fly cells are not so different from human ones, so we can make important discoveries about cell biology from studying these little insects. In a recent study, scientists looked at how the fruit fly brain senses changes in temperature to try to determine exactly how temperature affects the circadian rhythm.

New Insights Into How Temperature Affects the Circadian Rhythm 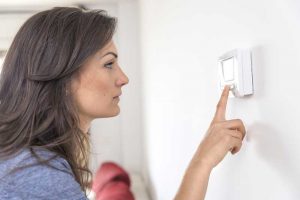 In addition, there is a difference in the way temperature acts as a timing cue. While it cannot “reset” internal clocks, as light and melatonin can, changes in temperature make them skip forward or backward slightly. This may be part of the reason that people become sleepy when they are cold, or why people generally have more energy during warm weather months.

How Does This Apply to Humans?

While this study was performed on fruit flies, there are many implications for human health. Fruit flies have similar cell processes to humans, which is why they are so often studied to look for the genes behind certain bodily processes. There is a large body of research suggesting that the human circadian rhythm also exhibits a marked response to changes in temperature. While further research will be needed, it is likely that we have a gene similar to IR25A that makes similar proteins with similar functions.

There may be a time in the future when temperature is used to treat circadian sleep disorders, much as light therapy and melatonin are used today. Temperature appears to have a great deal of impact on the circadian rhythm and may be a core issue for people with sleep problems and other circadian rhythm disorders.