There are many reasons to limit your exposure to insecticides. According to a new study, interference with melatonin pathways and higher risk for diabetes may be among them.

How much do you know about the ingredients in your preferred insecticides? Carbaryl and carbofuran are common ingredients in many of them—and the focuses of a recent study. These insecticides are both chemically similar to melatonin, the hormone that regulates sleep, metabolism and a variety of other important biological processes. In fact, they are both so similar to melatonin that they can bind to melatonin receptors and cause some of the same reactions. This activation of melatonin receptors can lead to circadian rhythm disruption and metabolic syndrome, among other ill effects.

Most people associate melatonin with sleep. While this hormone plays a very important role in preparing our bodies for sleep at night and helping us to get the rest we need, it has other roles in human health as well. Melatonin serves as a major cue to our cells that it is time to repair DNA, release toxins built up from the day and recuperate in such a way that we may awake feeling refreshed. Melatonin is also very important in the regulation of our metabolic activities. This is the reason that people who work shift work or otherwise do not get enough sleep are at higher risk of developing diabetes and other metabolic diseases.

One of melatonin’s least known but most important roles is as a free radical scavenger, or antioxidant. Our cells produce reactive forms of oxygen in daily metabolic reactions. If not removed, these can damage cells permanently. Even worse, they can damage DNA and lead to cancer as well as other serious diseases. Melatonin protects us from the toxins we encounter both in our environment and in our own body in addition to helping us to rest and regenerate. Because this hormone has many roles to play in health, being exposed to chemicals that trigger melatonin receptors can be destructive to health.

How Can Insecticides Increase the Risk for Diabetes? 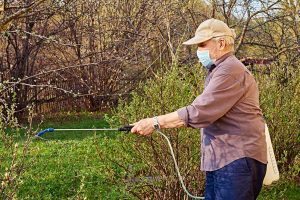 If melatonin is good, how can chemicals that imitate it be bad? As in so many areas, timing is everything. The amounts of melatonin released and the times at which it is released are both tightly controlled in our bodies because these are important to its function. Melatonin is released in very specific amounts at very specific times, in response to both internal cues and information from our environment. When these insecticides bind to melatonin receptors, they induce activities at the wrong time and in the wrong amounts. In addition, negative feedback loops that govern melatonin levels may be affected, leading to less release of melatonin when it is actually needed.

According to the senior study author Margarita L. Dubocovitch PhD,

“By directly interacting with melatonin receptors in the brain and peripheral tissues, environmental chemicals, such as carbaryl, may disrupt key physiological processes leading to misaligned circadian rhythms, sleep patterns and altered metabolic functions increasing the risk for chronic diseases such as diabetes and metabolic disorders.”

Low melatonin puts people at a higher risk for diabetes and melatonin released at the wrong times may have a similar effect.

Are these insecticides the only chemicals to have this effect? Our environment is filled with chemicals that benefit our modern way of life. However, these chemicals may interact with our bodies in ways that are unknown or difficult to understand. For the meantime, limiting your exposure to these two insecticides appears to be an important way of maintaining a healthy circadian rhythm while lowering your risk for diabetes and other metabolic diseases.