Shift work and insomnia have been linked to a variety of endocrine disorders, including type 2 diabetes. A new study points to abnormal melatonin signaling as a possible cause.

Shift work is a necessary evil in modern society. Not only do people need access to emergency services at night, but we also can perform activities such as shopping from home at all hours. The result is that a large proportion of workers are busily at work when nature says that they should be sleeping. When you add in insomnia and other sleep disorders, there are many people who are wide awake late at night. This disrupted circadian rhythm has been linked to a plethora of maladies, including type 2 diabetes. A new study may have found the reason for this connection.

When our eyes perceive a lack of light, our brains kick into gear and prepare us for sleep. Messages are passed from the retinas of the eyes to the suprachiasmatic nucleus of the brain to the pineal gland, with an end result of increased melatonin secretion. Melatonin is well known for making people sleepy, but it also has a variety of effects on cells. Melatonin is the body’s cue that it is time to sleep, repair DNA damage and replace worn out cells.

People who work night shifts have a disrupted circadian rhythm. They are busy at work when their brains are preparing for sleep. They often sleep when light levels are high and melatonin levels are low, which means they cannot perform essential cell activities at the correct times. Shift work has been labeled a carcinogen by the World Health Organization due to its effects on health. 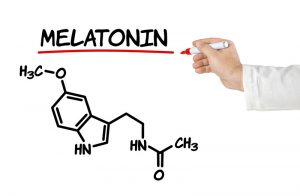 Diabetes appears to run in families, with some people more predisposed to developing it than others. New research suggests that a mutation of melatonin receptors may be the reason for this. Around one-third of people have a slightly different version of the melatonin receptor MTNR1B, which is present on the cell membranes of pancreatic beta cells.

The beta cells of the pancreas secrete insulin. When melatonin binds to the receptors on these cells, insulin secretion slows down. With the slightly mutated version, however, beta cells respond to melatonin by increasing receptor numbers. This increases the effects of melatonin on these cells, causing hypoglycemia and other pre-diabetic conditions. When people with this gene variation work nights and are thus eating while they have high levels of melatonin, they have higher blood sugar, which leads to higher risk of eventually developing diabetes and other endocrine diseases.

Who Should Work Nights?

There are several ways that this research can be used to improve public health. First, we now have a better understanding of how melatonin affects diabetes risk. People who work night shifts may be able to avoid many of the negative health effects by not eating high carbohydrate foods at late night hours. In addition, researchers in chronobiology suggest that people who are at risk for diabetes could have a genetic test to identify whether they carry this gene. While some people will always have to work nights to keep our society running, people with higher health risk could decide instead to work a day shift, leaving night work to those with the more common receptor gene.

Research is constantly revealing that melatonin affects our bodies in more ways than we could have imagined. Understanding the links between circadian rhythm and whole body health will allow us to help people stay healthier and lead longer, happier lives.