New chronobiology research has discovered a light-sensing molecule that may be partially responsible for our eyes’ ability to sense day and night.

How do our bodies sense light? There are several things that we do know about this complicated topic. We know that our circadian rhythms are partly dependent on light levels in our environments. We know that messages about light levels are recorded by our retinas and sent to the suprachiasmatic nucleus of the brain. New research on fruit flies has identified a retinal light-sensing molecule that is likely crucial in the perception of light and dark.

Why Do We Study the Fruit fly? 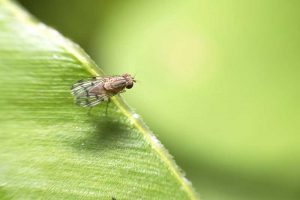 Why does a study on fruit fly chronobiology matter to humans? Researchers in a variety of fields have begun using Drosophila, a species of fruit fly, as an animal model for a variety of research. While we used to use mice or rats for the same purpose, fruit flies have short generations so we can see the effects of decades of human life in just a few weeks. They also can be easily bred to have certain genetic mutations, allowing us to examine the function of certain genes.

While fruit flies are not human, they often use the same or similar molecules for similar tasks. We are actually more genetically similar than we are different. Issues that we discover in Drosophila often exist in humans at some point, making fruit fly research both valid and valuable.

The new light-sensing molecule that has been identified is a rhodopsin called Rh7. But what does that mean in layman’s terms? Simply put, a rhodopsin is a protein in the retina that senses light. Each rhodopsin molecule contains a purple-hued protein that is quickly bleached to yellow-white by light. This is part of how the eyes sense light.

Rh7 is different from other types of eye molecules, such as rods and cones, because it is expressed in the central brain where pacemaker neurons set the circadian rhythm rather than being expressed in the eye itself. This may explain why this molecule is so interconnected with the brain. It appears to be important and crucial for seeing in the dim light that often permeates the modern world in the evening and at night. People who suffer from night blindness may have a defective Rh7.

The Light-Sensing Molecule That Helps Set the Time

Researchers in this study looked at a molecule in the eyes of Drosophila fruit flies called cryptochrome. This cryptochrome responded only to very bright levels of light, while the fruit flies continued to show biological reactions even in lower light levels. This suggested that not just any molecule was at work here. Upon closer examination, scientists were able to identify Rh7, the dim light-sensing molecule.

Losing either cryptochrome or this rhodopsin will have negative effects on the fruit fly’s eyes. Both are necessary in order for the insect to have a full range of vision and also for their circadian rhythm to function properly. However, it became clear that the fruit fly’s lost a different type of vision when they lost these proteins. Unsurprisingly, cryptochrome records only very bright light while Rh7 can read very small changes that occur in dim light. Moreover, Rh7 appears to have an even greater effect on circadian rhythm. Fruit flies that have this protein inactivated suffer from a great deal of difficulty regulating their sleep-wake cycles.

The discovery of this molecule brings up many interesting questions. Are people who are more sensitive to light pollution simply in possession of an overactive Rh7? Is this light molecule affected by things like constant exposure to bright lights? There is much that we yet have to learn about Rh7, but this research on fireflies appears to present a great beginning.