The Basics of Your Sleep Cycle

If you’ve ever pulled an all-nighter or had a newborn, you know that sleep is important. Without sleep, people lose cognitive function, are at high risk of getting in life-threatening accidents and even are more prone to developing chronic diseases such as cancer and heart disease.

However, it is not just the length of time that you sleep that is important. Your body fits five stages into a healthy night’s rest. If these phases are interrupted or don’t occur due to a physiological problem, you may feel tired and sleep-deprived even after eight hours of shut-eye. Getting the right amounts and types of sleep is important to your circadian rhythm and your overall health.

The Two Kinds of Sleep 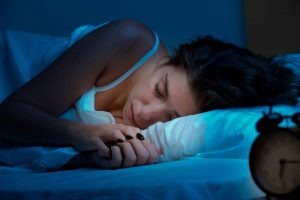 Although there are five phases of sleep, they can be classified into two types: REM, or rapid eye movement and non-REM sleep. Non-REM sleep makes up about three-quarters of your sleep and has four stages that can be distinguished on an electroencephalogram, or EEG, which is a diagnostic test that detects electrical activity in your brain. On the other hand, REM sleep is a single phase marked by high brain activity and rapid eye movement.

REM sleep is the fifth stage of sleep and the most important. During REM sleep, your body is paralyzed but your eyes move rapidly, following your gaze as you dream. In addition, there are drifting movements and other movements not seen in wakefulness.

REM sleep is when dreams occur and thus is a time of high levels of mental activity. Not only is your brain processing events of your dream and reacting to them, but it is actually creating the environment of your dream. Brain waves during REM sleep are even higher than those seen while awake.

The Four Stages of Non-REM Sleep 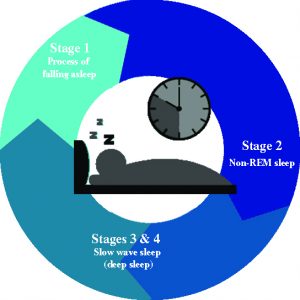 Your body is not paralyzed during non-REM sleep and eye movements are very slow. During non-REM sleep, your body will cycle through four distinctive phases that lead to REM sleep. During Stage 1, you are still in the process of falling completely asleep. This stage lasts less than seven minutes and is easily interrupted.

Stages 3 and 4 are known as slow wave sleep due to slow, high amplitude brain waves. Stage 3 brain waves have fewer of these slow waves as the body builds up to Stage 4 when slow waves make up more than half of all brain activity. These stages are both considered deep sleep.

Cycling Through REM and non-REM Sleep

Throughout the night, you go through several complete sleep cycles. Your body will go through Stages 1-4 of non-REM sleep and then a short period of REM in the first cycle. The first cycle lasts around 90 minutes total. Successive sleep cycles will have much longer periods of REM sleep, as long as two hours.

Napping can be a great way of improving your mental function if done the right way. When people wake up out of Stages 3 or 4 sleep, they are often more tired and groggy than when they fell asleep, a state known as sleep inertia. Because of this, doctors and researchers in chronobiology recommend that people nap a specific amount of time. A 15-20 minute nap, which takes you through Stages 1 and 2, will make you less tired. If possible, a 90-minute nap will leave you even more refreshed as you can go through a complete sleep cycle. However, other lengths of nap will likely leave you feeling even worse.

Over the years, sleep phases change in length, with REM sleep length steadily decreasing as we age. However, healthy sleep will still follow this general pattern. Failing to get at least two complete sleep cycles will leave you feeling exhausted and have negative effects on both your function and health. Maintaining a healthy circadian rhythm, including a healthy sleep schedule, is important for psychological and biological health.