Up Before Your Alarm? When to Get Up and When to Go Back to Sleep

Do you ever wake up early, before your alarm goes off? Find out why this happens and whether it’s better to hit the snooze button or just get up.

Many people think of insomnia as the inability to fall asleep. However, being unable to stay asleep and waking early are also types of sleep disorders when they occur often enough to interfere with your daily life. So what should you do when you wake up early? Modern medicine has the answers.

Why Do Some People Wake Up Early?

In order to understand the best way to react to waking up early, it is important to understand the mechanisms behind how we sleep. First, our circadian rhythms control our sleep cycles and thus can cause early waking. If it is becoming light outside, you may wake early because your body perceives the light as a waking cue. If you have recently changed schedules or are trying to sleep beyond your normal waking time, your circadian rhythm may be to blame. This intricately-controlled internal clock will try to maintain the status quo, which may lead to waking earlier than you wish.

There is another mechanism behind sleep called sleep homeostasis. As we go throughout our day, chemicals such as adenosine build up in cells and body fluids. When these have built up enough, we begin to feel sleepy. If you fall asleep, your body will remove adenosine and replace it with glycogen to fuel a new day. This is why you might be tired at 3 p.m. after a sleepless night, despite it being light outside. Your body senses high adenosine levels and thus pushes you to sleep.

Determining the Cause of Waking Early 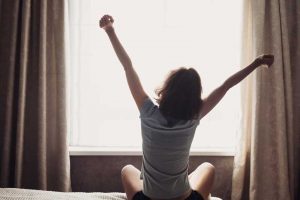 What to do when you wake up early depends on the reason you are waking. If you have had enough sleep (seven to eight hours for most adults), then your body is likely sensing that your cells and fluids have been replenished and are ready for another day. Most people will benefit from simply getting up for the day early if this is the case because their bodies have had enough rest. If it is light out or you are in a loud environment, your body may be falsely sensing that it is time to wake. If this is the case, remove the noise, light or other wakefulness cues and try to sleep until your normal waking time.

Some people consistently wake up early even when they have not gotten enough sleep and there are no external cues causing this wakefulness. When this interferes with health and daily life, it is known as advanced sleep phase disorder.

What Is Advanced Phase Sleep Disorder?

Because this circadian sleep disorder interferes with work and normal modern life patterns, it can be very debilitating. However, it is often treated successfully with light therapy throughout the day and timed release melatonin at night. The combination of these two therapies ensures that people have the hormones associated with wakefulness and sleep at the appropriate times. If you have woken early on a regular basis for three or more months, it is possible that you have this disorder.

Treating sleep disorders can be complicated, but the treatment for waking up early is actually relatively simple. Once you have determined the cause of your wakefulness, it is often easy to develop a successful treatment that allows you to get the sleep you need.