Another Link Found Between Gut Bacteria and Mental Health

Are you struggling with stress? New research, which was performed on medical students before they took a number of school exams, suggests that a simple over the counter supplement can help make stress more tolerable and less destructive.

If there is one constant in the modern world, it’s stress. The American Psychological Association has referred to stress as an epidemic and a great threat to both mental and physical health. While some people find relief through yoga, meditation, mindfulness and other techniques, many people struggle to kick their anxiety once and for all. However, a new study suggests that a simple probiotic supplement may be an effective approach to the rigors of contemporary life.

The brain-gut axis is a hot new buzzword in the field of medical research. Researchers have discovered that there are multiple connections between the gut and the brain, which are maintained by nervous system and hormonal activity. Microfora, or gut bacteria, have an immense effect on your gut and thus on your health.

The brain-gut axis allows our intestines and the bacteria that live there to influence our health in a variety of ways. For example, people who have unbalanced levels of gut bacteria are more likely to suffer from PTSD. The exact mechanism to this theory is unknown, but serotonin is believed to be part of the answer. Our intestines contain more serotonin receptors than our brains. Serotonin is made by microorganisms in our guts, which means these tiny microbes can have a substantial effect on mental health.

In addition, these gut bacteria have their own circadian rhythm, which in turn affects our functioning. A growing body of research suggests these microbes are essential for human health, and that even a small imbalance may cause dysfunction.

Probiotics: The Answer to Managing Stress? 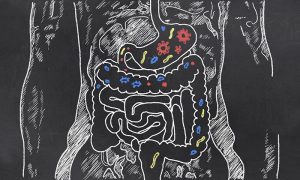 If gut health and a diverse bacterial balance is linked to our mental health, what does this mean for stress levels? Researchers decided to answer this question by studying medical students. Medical students undergo one of the most rigorous, and thus stressful, training programs in the world. Test time is an especially high stress activity. In a four-month study, half of a sample group was given probiotic supplements in the form of fermented milk, while the other half were not. They then took their normal exams. The ones who took the probiotics reported lower levels of GI discomfort and lower stress. They also showed less rise in cortisol, which is a hormone released in stressful situations. Meanwhile, the control group which did not receive supplementation saw a significant increase in the expression of genes related to stress and anxiety.

This research, while using only a small sample, suggests that probiotic supplements can be a helpful addition in times of stress. While stress can be productive at times, such as inspiring a medical student to study harder, it can also be counterproductive and even have a wide range of negative health effects. Dampening the effects of anxiety may improve public health by reducing the physical and mental illness associated with modern stressors.

Researchers are not sure exactly how the probiotic supplement lowered stress. Due to the fact that our gut microflora produce serotonin, this is one possible explanation. This subject will need to be studied further, but there appears to be a strong connection between gastrointestinal health and mental health.

Before modern technology, a stress response was a useful adaptation. The increase in cortisol allowed people to run away from danger faster and react more quickly to hazards in their environment. In the modern world, however, there are no lions to run from. Our natural responses to danger can become a health problem when we are too stressed over too much time. Natural supplements may be the best approach to this very natural health problem.

Sleep Problems Among Nurses Increased During the Pandemic

Due to the nature of the job, with its inherent stress and the necessity of shift work, sl... [Read More][weiterlesen]