Biological Rhythms and How They Affect a Woman's Fertility

Melatonin has been proven to affect sleep-wake patterns, cell growth and a variety of cell pathways. New studies indicate it may control female fertility as well.

Our bodies run on a variety of rhythms, including a 24-hour circadian rhythm and a seasonal rhythm. Women’s bodies also have a monthly cycle that governs female fertility. New studies suggest that these cycles may be more intertwined than doctors previously believed, with melatonin acting as the link that ties them together.

The Hypothalamic-Pituitary-Ovarian Axis and Female Fertility

A woman’s fertility is controlled by a coordinated multi-organ system known to doctors and medical scientists as the hypothalamic-pituitary-ovarian axis. This is a long term that describes a rather simple concept. The hypothalamus functions as the master organ of female fertility, sending signals to the pituitary gland via a hormone called GnRH. GnRH stimulates the pituitary gland to make luteinizing hormone (LH) and follicle stimulating hormone (FSH), which then stimulate the ovaries to make progesterone and estrogen. Progesterone and estrogen stimulate a variety of physiological effects, most notably controlling ovulation and fertility.

Melatonin has a variety of effects on the ovaries. It acts as an antioxidant to this delicate and important tissue, preventing cell damage. This also increases egg quality, which is a crucial factor in fertility. Women undergoing IVF who take melatonin supplements have a higher likelihood of getting pregnant and giving birth to a healthy baby. This suggests an intersection between the circadian rhythm and the monthly rhythms related to fertility. 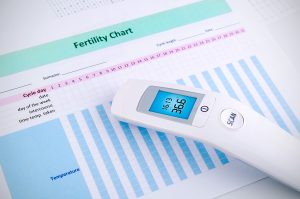 When the multiple rhythms and cycles that control our bodies are aligned, we benefit from optimal health, including maximum fertility. When these cycles become misaligned, our health and fertility can suffer. A recent study found that jet lag and other circadian rhythm disorders can have negative effects on a woman’s fertility. Researchers believe that a disruption in melatonin production is the root of this issue.
Mice have a 24-hour clock that is very similar to that of humans with mice being nocturnal. In a newly published study, researchers disrupted the circadian rhythm of female mice just before they were bred. The female mice who had fewer hours of daylight a day had lower fertility rates than normal, with just half of them giving birth. The female mice who had more hours of daylight had even more serious effects, with only one in five having a litter. This is very low compared to the control group of mice. Ninety percent of mice who were allowed a normal sleep-wake cycle had a healthy pregnancy and birth.

The implications of recent research are clear: melatonin indeed influences a woman’s monthly cycle, mainly by acting on the hypothalamus to affect GnRH release. This begins a cascade that eventually reaches the ovaries. Because ovarian function is crucial to a woman’s fertility, a healthy circadian cycle, or lack thereof, can influence your chances of achieving a healthy pregnancy. While there are multiple factors that influence your chance of getting pregnant, taking a melatonin supplement and getting the sleep your body needs can increase a woman’s fertility.

Weighted blankets may be a valuable tool in the quest to improve sleep, a key element of o... [Read More][weiterlesen]

For Women, Sleep Deprivation and Lupus Risk May Be Linked