While new wonder drugs for hypertension hit the pharmaceutical market almost every year, many people still live with uncontrollably high blood pressure and the accompanying high risk of heart attack. However, new studies in chronobiology show that chronotherapy, or timing therapies and medication according to the circadian rhythm, may present a hopeful new avenue of treatment.

The Internal Clock of Cardiovascular Function 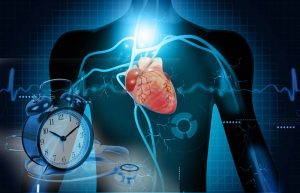 As with almost every system in the human body, cardiovascular functions follow a 24-hour clock, or circadian rhythm. Shortly before a person awakens, their body begins increasing the levels of hormones associated with wakefulness including cortisol, catecholamines and angiotensin. These increase blood pressure and heart rate, which prepare a healthy person to awaken and begin their daily activity. However, in a person with heart disease, a sharp increase in these hormones present a health risk. Heart attacks are most common in the morning due to the resulting spike in blood pressure and pulse, and heart attacks in the morning are most likely to lead to sudden death.

Blood pressure increases further in the morning when a person rises and begins moving. This increases demands on the heart, which must begin pumping more blood to maintain oxygen supply to the body. Platelets are also more likely to form clots in the morning, increasing the risk of stroke and other cardiovascular events.

After peaking in the morning, blood pressure declines throughout the day and reaches its 24-hour low between midnight and 3 a.m. The pulse follows the same basic rhythm. Researchers believe that both blood pressure and heart rate are governed to a large degree by sympathetic tone, a biological system which acts through hormones such as epinephrine and norepinephrine. Sympathetic tone is higher during the day to keep the body and mind alert and ready for activity.

When studying the rhythmicity of heart attacks and blood pressure, circadian biology researchers quickly realized that their patients followed one of two daily patterns. These two groups of patients were called dippers and nondippers. Dippers have a night blood pressure that is at least 10 percent less than their daytime blood pressure, while nondippers show a much smaller dip. This is significant because nondippers have a greater risk of death from a cardiovascular event, suggesting that a normal circadian rhythm is important to heart health and disease prevention. Nondippers are at an especially high risk of nighttime heart attack. 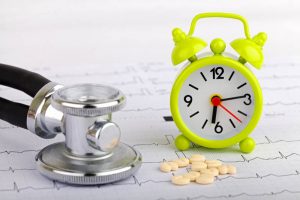 Timing blood pressure medication and other treatments for cardiovascular disease may offer hope to people who have hypertension that is difficult to control. Several recent chronobiology studies suggest that drug effects can be maximized and side effects minimized by taking them at certain times of the day. For example, beta-adrenoreceptor antagonists, known to many as beta-blockers, reduce daytime blood pressure significantly but have little effect on nighttime blood pressure. This makes them a good choice for patients who are dippers, but nondippers may need a different medication for nighttime hypertension.

Calcium channel blockers, another common medication for hypertension, show decreased bioavailability when given in the evening. Despite this, certain drugs in this class are helpful with nighttime blood pressure in nondippers. Two drugs even convert nondippers back to the normal blood pressure rhythm of a dipper, which may reduce the chances of sudden death.

ACE inhibitors are taken once a day, but people who are nondippers see a drastic lowering of blood pressure when they take them at night rather than in the morning. Timing this drug correctly may prevent many of the late night heart attacks seen in nondippers.

A person’s circadian rhythm, including whether they are a dipper or nondipper, can make a huge different in what treatments and timing are the most effective. Many lives may be saved by simple testing to determine how a patient’s blood pressure changes at night and then applying chronotherapy according to their type. These new findings offer hope for people who struggle to control hypertension as well as the medical team trying to help them.

Exposure to too much light at night could be putting your overall health at risk. A breakt... [Read More][weiterlesen]