Chronobiology and the Science of Time 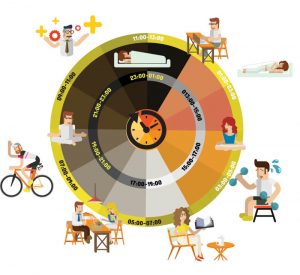 Chronobiology refers to the process by which organisms time their behavior and physiology so that everything behaves rhythmically. In other words, it is biological timing. It is the rhythms of life; the internal clocks that control when you wake up, eat, digest your food and perform nearly every function that an organism is to perform. It is also defined as an examination of a living organism’s adaptation to lunar- and solar-related rhythms. These cycles are referred to as “biological rhythms.”

Scientists began to legitimately study chronobiology around the 1960s, although it was first recognized in the 1700s by examining the movement of plant leaves. This 18th century observation led to Carolus Linnaeus, a botanist and naturalist, to create a flower clock using certain species of flowering plants. He would arrange the plants in a circular pattern to create an accurate clock that could indicate a specific time of day based on how open the leaves were. By the 1960s, the study of chronobiology had changed. This time, studies were made up of biology, psychology, neurology, endocrinology and genetics. This was when the term “circadian,” defined as a 24-hour period, was created. Other aspects that go into the study of chronobiology include reproduction, development, evolution and ecology, to name a few.

Circadian rhythms, by definition, are physical and behavioral changes that follow a roughly 24-hour cycle and can persist in the absence of cues from the environment. Circadian rhythms persist in a constant state of darkness, but light can reset them and they are usually matched to the environment. These rhythms adjust to food intake, heat loss and heat retention, which are part of the body’s basic energy regulation and behavioral activity. Circadian rhythms can be broken down into the following cycles during a 24-day period:
• Diurnal – Active during the daytime (example: humans)
• Nocturnal – Active at nighttime (example: cats)
• Crepuscular – Active during the dawn and dusk hours (example: white-tailed deer).
There are other cycles that have been studied as well. They include:
• Infradian rhythms – Cycles that last longer than 24 hours, such as annual reproduction or migration cycles of some animals
• Tidal rhythms – The transition between high tide and low tide
• Lunar rhythms – Follows the lunar month, which is relevant to marine life
• Ultradian rhythms – Cycles that are shorter than 24 hours. Such as the nasal cycle or REM cycle
Within every cycle, there is a time period in which a certain process may be more active than others. This is called “acrophase.” If a process is not as active, then it is called “bathyphase.” Governing the circadian rhythms that make up the main biological time cycle is the SCN, or suprachiasmatic nucleus. The SCN is about the size of a grain of rice and is found right above the optic nerve in the hypothalamus. The SCN is wired into the optic nerve, so that it gets its dark and light cues from the light receptors housed in the retina of the eye. This information is sent to the pituitary glands and different areas of the hypothalamus. Hormones such as cortisol and melatonin are then released into the bloodstream to control behavioral and physiological responses, such as blood pressure and body temperature.

Lunar rhythms can affect the internal clock by changing sleep patterns in humans when measured under the highly controlled conditions of a circadian laboratory study protocol without time cues. Lunar rhythms are a phenomenon which lines up with a cycle of a lunar month. In some cases, these rhythms may depend on external cues, such as a greater or smaller amount of moonlight due to the moon’s phases. Lunar rhythms can contribute to an individual’s sleep deprivation. However, sleep loss is only one piece of the puzzle, as your diet can also be affected. 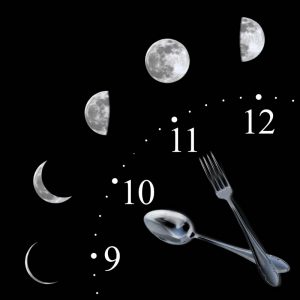 Ingesting food at the wrong time can lead to obesity. Obesity can contribute to chronic sleep deprivation, which can lead to a number of problems beyond fatigue and restlessness. Altering the internal biological clock will disrupt the signaling of lipids in the plasma that go to the feeding centers of the brain and alter behavior, which can result in signifcant weight gain. The findings are consistent with correlations that were previously made between sleep disorders and night-shift work. Studies from the World Health Organization (WHO) also show a higher risk for prostate and breast cancer in humans that perform night-shift work.

Another aspect of the molecular clock with ties to metabolism is a molecule called Rev-Erb, and it exists in two forms: Rev-ErbA and Rev-ErbB. It is the member of a family of molecules called nuclear receptors. They are considered the “master regulators” of development and metabolism. Scientists have found that variations in Rev-Erb levels with the circadian cycle affected the synthesis of lipids in the liver. Rev-Erb disruption caused a dramatic increase in liver fat in lab mice. Because fat in the liver can be both a cause and a result of diabetes, it can also be an issue for the liver itself.

Chronobiology is hardwired into our system and yet social and economic constraints of modern humans constantly provoke it, whether it’s due to work, disorders or social gatherings. One aim of chronobiology, other than simply understanding the details regarding the forces that control our inner clocks, is to find better ways to adapt to and live with the guaranteed disruptions that the world today imposes upon our ancient and natural biological rhythms.

Our inner clocks aren’t just located in our brains. They are found all throughout the human body. Examples include: the liver, kidneys, heart and pancreas. All of these contain their own internal biological clocks and these clocks are all-controlling local tissue-specific functions. But the master clock resides in the SCN. It controls all the clocks of the body.

The study of chronobiology has led to a number of developments that include the discovery that melatonin and light therapy administration can reset both human and animal circadian rhythms. Furthermore, the presence of low-level light at night can accelerate the circadian re-entrainment in hamsters. It is believed that this is due to the light being a moonlight simulation. 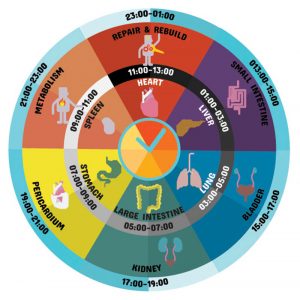 There are different biological markers and assessment tools that can be used to determine your chronotype, or whether you are a morning “lark” or night “owl.” It may come down to what a person is used to or what they prefer as to how they handle a specific time of day. The research in this area is still ongoing.

Overall, chronobiology or circadian biology has come a long way since the 1960s. What was once a difficult science to promote and teach, has now became a very important field that encompasses molecular biology, endocrinology, physiology, psychiatry, genetics, neurology, sleep studies and even astronomy when dealing with the cosmic origins of our biological clocks and lunar rhythms that have an impact on the earth.