The chronobiology community received one of the highest recognitions on Monday as the Nobel Prize in physiology or medicine was awarded to three Americans for their discovery on how internal clocks and biological rhythms govern human life.

Jeffrey C. Hall, Michael Rosbash and Michael W. Young took home the prize “for their discoveries of molecular mechanisms controlling the circadian rhythm,” said the Nobel Foundation. The trio’s work explains how plants, animals and humans adapt their biological rhythms in synchronicity with the rotations of the Earth.

Genes of the Inner Clock Identified

According to the summary of the discovery, the Nobel Assembly at Karolinska Institutet:

“Using fruit flies as a model organism, this year’s Nobel laureates isolated a gene that controls the normal daily biological rhythm. They showed that this gene encodes a protein that accumulates in the cell during the night, and is then degraded during the day. Subsequently, they identified additional protein components of this machinery, exposing the mechanism governing the self-sustaining clockwork inside the cell. We now recognize that biological clocks function by the same principles in cells of other multicellular organisms, including humans.

“With exquisite precision, our inner clock adapts our physiology to the dramatically different phases of the day. The clock regulates critical functions such as behavior, hormone levels, sleep, body temperature and metabolism.”

Origins in the 18th Century 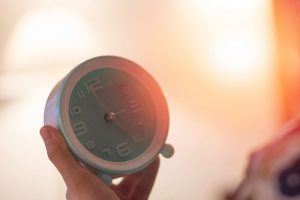 When astronomer Jacques d’Ortous de Mairan studied mimosa plants in the 18th century, he discovered the plant’s leaves open toward the sun during the day and close at dusk, thus discovering plants have their own biological clock. This led to findings that humans and animals also have a biological clock and daily physiology fluctuations. This daily adaption is dubbed the circadian rhythm.

This year’s Nobel Laureates sought out how this internal clock actually works. Hall and Rosbash previously isolated the period gene in 1984, followed by discovering that PER (the protein encoded by period) accumulated during the night and degraded during the daytime, proving the PER protein levels oscillate over a 24-hour cycle in sync with the circadian rhythm. Young went on to discover a second clock gene called timeless that encoded the TIM protein necessary for a normal circadian rhythm. This resulted in Young showing that when TIM bound to PER, the proteins entered the cell nucleus and blocked the period gene. This feedback loop shed light on how cellular protein oscillation occurred. Then Young identified the doubletime gene (DBT) that delayed the accumulation of the PER protein.

Though these discoveries, they learned that all multicellular organisms—including humans—use similar mechanisms to control circadian rhythms. During the different phases of the day, the body is primed for different processes. For example, cortisol is released at 6 a.m., 9 a.m. has high alertness and your best coordination is midday around 3 p.m. with the fastest reaction times occurring then. Your highest body temperature is around 6 p.m., the body’s highest blood pressure occurs in the evening, followed by melatonin secretion around 10 p.m. The deepest sleep in the cycle occurs after midnight, followed by the lowest body temperature around 3 a.m. and then the cycle begins anew.