350 years ago, the creator of the pendulum clock observed that two machines with occasionally synchronized times, called coupled oscillators, would be an ideal way to regulate time. Centuries later, scientists are discovering that coupled oscillators may be the key to how the internal clocks in our gastrointestinal tract are set.

What Are Coupled Oscillators?

Imagine two pendulum clocks hung next to each other on a wall. Their times will be slightly different, but occasionally they will synchronize. In nature, waves often are used to communicate messages similar to the time communicated by a clock. When these waves line up, they amplify each other and communicate a message of different amplitude.

An oscillator is simply a natural phenomenon or device that releases a rhythm, similar to a pendulum on a clock. We can see how coupled oscillators work in sound, with the sounds becoming greater when the waves line up perfectly. The maker of the pendulum clock saw this pattern even if he did not know precisely what to call it or what it meant.

Chronobiology and the Growth of Our Gastrointestinal Tract

Our gastrointestinal tract may use the concept of coupled oscillators in their growth and division. The lining of our gastrointestinal tract is integral to a variety of functions, from digestion to absorption of minerals to even our immune function. Because these delicate cells are exposed to mechanical stress from foods as well as toxins on a daily basis, they must reproduce on a continuous basis. This occurs according to very particular timing, yet the stem cells lining our GI tract do not have robust internal clocks.

Rather than keeping time internally, these stem cells rely instead on at least two different sets of external cues. First, they get cues from the circadian rhythm that governs our entire body, telling them when it is night and day as well as when to expect to be busy digesting food. Second, they rely on the internal clocks of Paneth cells, which are nearby cells that are important both in immune reactions and in making compounds such as mucus that are necessary for digestion. But how do gastrointestinal stem cells coordinate two different sources of timing? Coupled oscillators appear to be the answer. 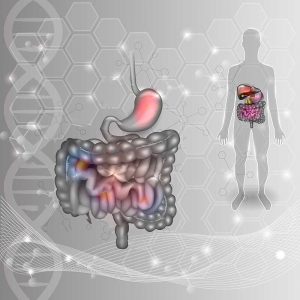 Gut stem cells appear to coordinate time cues from different sources in the same way pendulum clocks can oscillate together. But what does this discovery mean for human health? First, there are several disease systems in which a regenerated gut lining can make a huge difference, including common autoimmune diseases such as Crohn’s Disease and IBS, or irritable bowel syndrome. Second, knowledge of how the internal clocks of the GI tract are set can help to determine when to give certain medications. Many medicines can cause GI distress and other gut symptoms that make them difficult to take on a long-term basis. It is possible that in the near future, we may be able to time when people take these medications so they have better therapeutic effects and fewer side effects.

It is indeed amusing that a man hundreds of years ago made an observation that turned out to be true regarding our very intestines. There are certain themes that we see throughout nature, both outside and inside our bodies. The concept of coupled oscillators is one that we can see both in a pendulum clock and our own GI tracts. Understanding exactly how the clocks of our cells work will open up new opportunities for treating common human diseases and reducing a great deal of suffering.