How much does the amount of sleep you get affect your overall energy and mood? Most people would agree that getting enough sleep on a regular basis is very important for a person’s well-being and performance in life’s tasks. Not only is the amount of sleep important, but also our sleep cycles are critical, like when we work the night shift or experience jet lag, our bodies pay the price for not being on a natural cycle. The type of science that studies our biological rhythms is known a chronobiology. New research shows that changes in our circadian rhythm, or rhythms that follow a 24-hour cycle, and eating patterns can lead to obesity.

You may be thinking that when you are tired, you not only tend to eat more fast foods and high-fat foods, but you also exercise less. Although this is true, research is out that obesity is linked to the circadian rhythm of our gut microbes. Circadian rhythms directly affect your physical, mental and emotional functions. The microbes in our gut follow the circadian rhythm of their hosts and when disturbed, they don’t function as they should. This can lead to obesity and metabolic problems.

Scientist Eran Elinav of the Weizmann Institute of Science set forth a new study where he and his team analyzed microbes found in fecal matter at different times of the day. They found inconsistencies in the quantity of microbes and their biological activities. When the host did not have its normal feeding habits, then the microbes lose their rhythmic fluctuations. This loss leads to the microbes changing in composition, which favors the growth of bacteria that are associated with obesity and metabolic disease. This study was mainly based on studying humans and mice that suffered from jet lag.

Humans rely on the daylight schedule to know when to sleep. Humans are also accustomed to eating during daylight hours, while not eating during the night. The microbiome in a human’s body does not have any access to light in order to set its circadian rhythm. Instead, it relies solely on the host’s eating pattern during the day to drive its cycles. While the human hosts can reset their rhythms by waking and eating at different times or exposing themselves to artificial light during the night, the organisms in the microbiomes don’t get to reset their cycles. Therefore, the fluctuations in the microbes that occur from the flow of nutrients to the gut won’t be present when a host abruptly changes the eating cycle, such as when traveling to a very different time zone or when working overnight shift work. 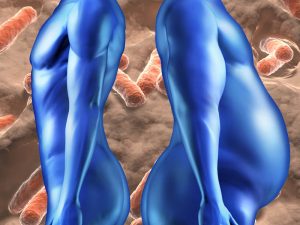 Interestingly, the research points to the fact that a person who has upset the rhythms of their gut microbes will suffer from more health problems from eating high-fat foods than a person who has maintained a natural circadian rhythm. The study that was done with mice showed that even though the mice ate the same kind and amount of high-fat foods, it was the ones whose rhythms had been altered that gained more weight and developed problems controlling blood sugar. When the same study was done on humans, scientists analyzed gut microbes from two humans who had traveled to Israel. Sure enough, they found high levels of a bacteria called Firmicutes that had multiplied due to the changes in eating patterns that occurred, and this bacteria is affiliated with obesity. A few weeks later, the humans were analyzed again and their gut microbes had returned to normal.

In short, these new research findings in chronobiology and obesity can serve to help people who have disrupted their circadian rhythms through late night shift work, jet lag or other ways. We need our gut microbes functioning properly in order to metabolize food in the most efficient way. Just like their human hosts, they flourish when eating cycles are predictable and when offset they metabolize food differently, which in turn can lead to obesity. Elinav says that the health implications from the study are still not clear and need to be researched further. However, you can take away this advice for when you are jet-lagged or sleep deprived: Be aware of what you’re eating and when you eat it because it gets metabolized differently.