Impact of Delayed Meal Times on the Body's Biological Clocks

People once rose, ate and went to bed at the same time every day. However, in modern times it can be difficult to keep any semblance of a regular schedule. This is especially true of mealtimes. Many people are eating on their feet at erratic hours, putting off meals and generally not keeping set meal times. The effect on our waistlines is well documented. Yet, the effect on our biological clocks is not as well known. Does our circadian rhythm become dysregulated with delayed meal times?

Food and Our Biological Clocks 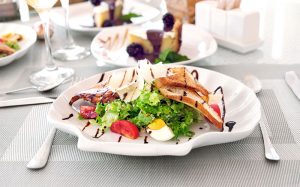 Most people are aware of the effects of light on the circadian rhythm. However, eating times also are an important timing cue. The gastrointestinal (GI) tract and metabolic system are run by many different clocks that synchronize to allow optimal processing of food and nutrients. For example, blood glucose metabolism is regulated by these internal clocks. Each organ of the GI system also has an innate circadian rhythm. While these internal clocks all run somewhat independently, they sync together to help our bodies digest food and absorb the nutrients we need.

This GI tract circadian rhythm has recently become a focus of many studies because it has been found to affect other systems as well. Gut health is increasingly being found to affect mood, sleep, cognitive function and more.

The Effects of Delayed Meal Times

Researchers decided to follow 10 young men as they went through changes in their meal times. Patients first ate meals on time for a set period, then had meals early, then had meals late. The meals were identical in terms of nutrition and calories. The patients then had their circadian rhythms measured.

Researchers found that certain internal clocks, such as blood sugar rhythms, were delayed when meal times were delayed. In fact, blood sugar rhythms were delayed just as long as the meals. PER2, a gene that helps to regulate circadian rhythm, also had delayed activity when meals were eaten late. This may explain prior research finding that people who wait until the evening to eat have serious and dangerous delays in insulin release. However, genes and biochemicals that deal with sleep-wake cycles were not affected by mealtimes. This includes melatonin and cortisol.

While mealtime delays can affect internal clocks, this effect appears to be limited to internal clocks that deal with metabolism and feeding. Sleep-wake cycles, surprisingly, appear to remain stable. Yet, this raises another question. Will this cause a mismatch between different internal clocks, resulting in dysregulation? Even more interestingly, could eating meals at later times be used to adjust the circadian rhythm to changes such as jet lag and time changes?

Does When You Eat Really Matter?

Clearly, it is optimal for people to choose meal times and stick to them. Does it matter what time you choose? Studies on this matter have yielded mixed results. Several studies have found that eating higher calorie foods in the morning rather than at night can lead to a lower weight than eating most calories later in the day. However, other studies have exhibited contradictory findings. Although there is some contradictory evidence regarding what you should eat and when, the importance of maintaining is a stable mealtime is a more generally agreed-upon concept. 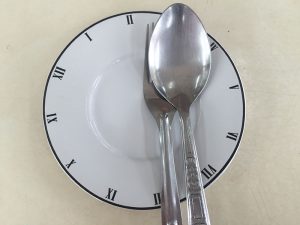 Consistent meal times clearly are important to maintaining a healthy circadian rhythm and functioning internal clocks. However, this is becoming an increasing challenge for many people in the Western world. Many people are eating while working, while driving or while performing other tasks. For some people, fast food on the go is their primary calorie source. This can lead to actually eating more calories in the long run. It also can lead to metabolic disturbances. While we have known for a while that these disturbances contribute to obesity, the latest research suggests that they are causing a variety of other negative health effects.

There are a few ways that people can help keep their internal clocks (and GI tracts) on a healthy, well-regulated schedule:

Although it can be difficult to maintain a stable schedule in the modern world, doing so remains very important to health. Eating at the same time every day will ensure that your body is able to process the food and absorb nutrients more effectively. This is one area where keeping a regular schedule can have very real effects on your body and your life.