Many diet experts recommend eating small meals throughout the day as a method of weight loss. However, research suggests this is the wrong approach.

With over half of American adults overweight or obese, diet and weight loss are huge industries in the United States and across the world. A wealth of often-conflicting information is offered to the public. While some of this advice is based on research, much of it is not. The advice to eat smaller meals throughout the day appears to be a counterproductive idea that is contradictory to known scientific evidence.

The Circadian Rhythm of Insulin Sensitivity

Insulin is crucial to the health of the human body, playing a key role in allowing glucose to enter cells and tissues. This hormone is mainly released when we have eaten to allow these ample nutrients to fuel our cellular processes. Insulin levels have a direct effect on our fat stores. When there is plenty of insulin, our bodies assume that we have enough energy from carbohydrates and go into storage mode. Nutrients are converted to fat stores, intended for use in times of famine.

Like most hormones, insulin has a distinct circadian rhythm. Insulin levels tend to be high during waking hours and low at night, when our bodies predict that we will not be eating or being particularly active. This means that people who eat at night are more likely to gain weight, which is supported by studies showing a link between shift work and obesity.

While experts often discuss circadian rhythm as though it is a single clock, it is actually comprised of countless smaller clocks throughout the human body. Many cells and organ systems have their own biological rhythm, independent of the central one set by the suprachiasmatic nucleus in the brain. Fat cells are one such type of cell. Even when removed from the human body and grown in a laboratory, fat cells show insulin sensitivity in routine spikes, with the biggest spike around noon. This means that fat cells are less likely to store calories from meals eaten around this time. Calories will be used as fuel during these times, leaving less in the bloodstream to be stored as fat. Eating less when insulin sensitivity is lower, on the other hand, encourages lipolysis, or the burning of fat stores. 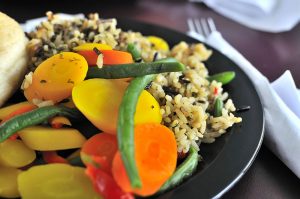 While caloric intake and exercising are important factors in weight loss, they are just the beginning of the story. Insulin levels, lipolysis and other important metabolic processes also play a huge role. Our bodies are intended to store nutrients for times of hunger, which are rare occurrences in the modern world. This is especially true for people who graze throughout the day and thus never have a time of even mild caloric need. Fat cells are likely to retain their energy stores for a future famine that never happens. Eating meals at regular times spaced throughout the day and avoiding eating at night can both encourage your body to burn fat while allowing the sensitivity of insulin to follow its normal circadian rhythm.

While old wives’ tales are sometimes true, conventional wisdom often proves not so wise in the face of scientific evidence. Eating small meals throughout the day will ensure that insulin levels never fall low enough to encourage lipolysis and may even contribute to glucose resistance, a precursor to diabetes. For now, chronobiology research suggests that eating three meals a day with the biggest meal around noon is the best approach to losing weight.