Is Our Environment Killing Us? How Environmental Toxins Disrupt Circadian Rhythm

Is our environment killing us? That just may be the case, according to a new study that was recently shared in the journal Ecology and Evolution. The research looked at how environmental factors, specifically toxins to which we are exposed, affect our circadian rhythm — the internal biological clock within each of us. In short, toxins may be inhibiting the way that internal clock works, which, in turn, may be making us more vulnerable to inflammation and the spread of disease.

Researchers at the Rensselaer Polytechnic Institute in New York used previous data collected by the Jefferson Project at Lake George as a starting point for their own project. The earlier study looked at how Daphnia pulex, a common zooplankton species, reacted to low levels of road salt. In the study, it was determined that the organisms were able to tolerate from 15 milligrams per liter of chloride up to 1,000 milligrams per liter within a 75-day time frame.

While the zooplankton may be able to tolerate the road salt, that’s not to say they are doing so without suffering consequences: The creatures, which live on algae and serve as a source of food for other fish, experienced a disruption in their circadian rhythms. Were their internal clocks affected in a more significant way, it could interfere with migration patterns, which can affect the entire marine ecosystem.

At a deeper level, the genes that control the plankton’s biological clock may also regulate other functions. Gene transcription, as well as how cells are reproduced, divided or evolved, is controlled by the circadian rhythm. By altering the circadian rhythm, road salt may be preventing these biological functions from occurring within their normal time schedules. 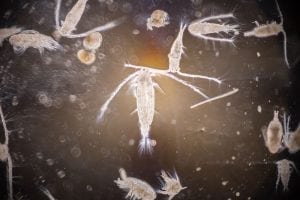 While the effect was minimal with lower levels of road salt, the study found that increased concentrations of the toxin had a more detrimental effect on the plankton. Specifically, they found that the development of mRNA of PERIOD (PER) genes were disrupted and that the genes deteriorated with an increased level of toxins. The researchers also found that the degree of circadian rhythm disruption was directly related to the level of toxins. As the salt levels were increased, the biological clock was disrupted to a higher degree.

The results of their study caused researchers to conclude that environmental toxins disrupt circadian rhythm in human beings as well. They believe increased levels of toxins in our own environment may be the reason degenerative diseases like diabetes, heart disease, cancer, obesity and depression are on the rise.

The researchers found their results especially troubling, due to the fact that they only used one toxin in the study. In real world conditions, plankton are exposed to a variety of toxins, such as heavy metals, drugs, pesticides and many other contaminants. Considering how widespread pollution has become, the toxins may affect the physical and psychological well-being of the animals. The findings in this study may just be a small sampling of a greater problem.

The toxins we continue to dump into the air may be affecting people and land animals to an even greater extent. In addition to exposure to pollution in the water, we continuously breathe toxins through contaminated air. This large amount of toxins to which we’re exposed may represent an even bigger disruption to our circadian rhythms than those that were observed in the plankton. While people presume that a certain level of toxins is safe, they may only be tolerating the pollution without realizing that it really is having an effect. While our bodies may be able to function with the toxic exposure, that doesn’t mean our circadian rhythms aren’t being suppressed.