Cortisol's Role in the Synchronization of Your Circadian Rhythm

Most people associate cortisol with the “fight or flight” response. While this biochemical indeed functions as a stress hormone—and can have negative effects in excess—it is a necessary hormone for a variety of human biological functions. It is produced from cholesterol in the adrenal glands, which sit directly on top of the kidneys. It is released in times of stress, low blood sugar, during exercise and in the morning. It responds to increased energy needs by raising blood sugar levels to allow ample energy and help control inflammation. The hormone also increases alertness and cognition, improving memory and generally making us feel more awake.

Although all-natural hormones can have negative effects on the body when produced at high levels, having the right amount of cortisol at the right times is important to good health. Without functioning adrenal glands making this hormone, people become very ill and can even die. As in the classic tale of Goldilocks, it is important to have hormone levels just right.

Like many hormones, cortisol appears to have a distinct circadian rhythm. It begins to rise around 2-3 a.m., helping us to wake up naturally. It peaks around 8:30 a.m. when most people are just beginning their workday. From there, levels of cortisol decrease throughout the day, reaching their lowest levels around midnight. This timing of release is important because cortisol acts as an integral messenger to our internal clocks. Research in chronobiology suggests that it may actual be the link between our central and peripheral clocks. 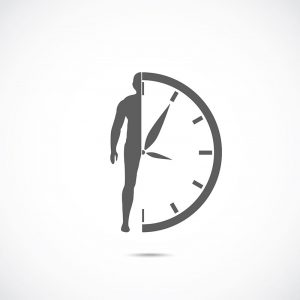 Although people discuss the internal clock as through it was one entity, there are actually several different clocks in the human body. The suprachiasmatic nucleus appears to function as the central clock, determining when we sleep and wake based on light levels. However, each organ has its own internal clock, which are collectively called peripheral clocks. When these clocks work together, we enjoy better health.

Cortisol is a key player in the alignment of central and peripheral clocks. When produced in high levels, such as in the morning, it causes organs and other peripheral tissues to activate certain genes that code for proteins associated with alertness and activity. These genes are turned off at night when cortisol levels are low. This allows the different clocks in the human body to run in sync with each other. This is important information for medical scientists and doctors because many people take this hormone as a pharmaceutical. Timing these doses to coincide with normal release may support better health while reducing side effects.

New circadian biology research has found that cortisol is an important factor in the human circadian rhythm. While high levels and low levels of this hormone can both be unhealthy and even life-threatening, getting the right amounts at the right times is essential for optimal health.

Why Do We Sleep? An Age-Old Question Revisited

The average human being spends roughly one-third of their lives sleeping. Yet we do not ye... [Read More][weiterlesen]