Light Therapy as Effective as Drugs for Treating Major Depression

Hope is restored to the millions that suffer from depression as new research reveals light therapy is highly effective—even more so than Prozac—in treating non-seasonal major depression.

According to the World Health Organization (WHO), depression is a common mental disorder that affects an estimated 350 million people globally. It is also the leading cause of disability worldwide. Those affected by depression suffer greatly and can have a poor quality of life as their ability to function at work, school and within their family is negatively affected.

Depression can lead to suicide, which is the second leading cause of death in those between the ages of 15 to 29. Every year, over 800,000 lives are lost as a result of suicide. There has been a dire need for the discovery of a new, effective treatment for major depression, as medications are only effective in treating depression in 60 percent of cases.

A Previous Link Between Light Therapy and Depression 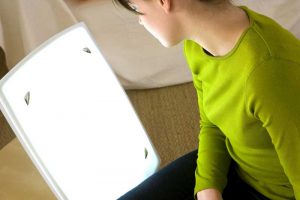 The results of the first placebo-controlled trial to show that light therapy is effective for the treatment of depression not related to seasonal affective disorder were published recently in JAMA Psychiatry.

Expert Raymond Lam and his professional colleagues followed 122 patients who were classified as being severely depressed to evaluate the relationship between light therapy and mood. According to Medscape, the patients all had a score of 20 or higher on the Hamilton Depression Rating Scale at baseline, which is indicative of severe depression. At the beginning of the study (week zero), the mean Montgomery-Asberg Depression Rating Scale (MADRS) was approximately 22 in all treatment groups.

These 122 patients were divided into the following four treatment groups, with approximately 30 patients in each group. The groups received treatment as follows:

The study groups underwent assigned treatment for eight weeks. Light therapy consisted of exposure to a full-spectrum fluorescent light box for 30 minutes daily, as soon as possible after awakening.

The number needed to treat (NNT) is useful in clinical studies as it helps to identify the proportion of patients that are likely to have treatment-specific effects. The best NNT is one, which means all participants experienced benefits with treatment and none did with the control. In this study, the NNT to achieve a response using the combination approach was only 2.4 when compared with the placebo, and the NNT to achieve remission using the combination approach was 3.5 when compared with the placebo.

How Does Light Therapy Help Depression?

Light therapy is effective as an antidepressant as it is thought to restore proper melatonin secretion and synthesis by the pineal gland, which allows re-establishment of the normal rhythm of hormone secretions that occurs daily in relation to a properly-functioning circadian rhythm.

Given the statistics associated with depression and the fact that treatment is often difficult as no one therapy is successful for all patients, the discovery of bright light therapy in treating major depression has the potential to be life-changing for many.

Dr. Raymond Lam describes these results as very exciting, as light therapy is inexpensive, easily accessible and has few side effects. He further states that patients can easily use light therapy in combination with other treatments such as psychotherapy and antidepressants.