Doctors and medical researchers have long known that seasons can affect moods. Researchers in chronobiology have recently identified the actual cause.

Seasonal affective disorder, or SAD, affects a large number of people. Circadian biology research suggests that 4 to 6 percent of people have moderate to severe forms of this disease, while up to one out of five people have a mild version. People with SAD suffer from depression and a variety of negative symptoms that are dependent on season, most commonly occurring in cold dark weather.

While SAD is recognized as a common and often serious disorder, it wasn’t until recently that researchers identified the pathophysiology, or biological basis, of this debilitating disease.

Seasonal affective disorder is currently diagnosed based on symptoms. People who report depression, fatigue and changes in sleep patterns and weight occurring exclusively in one season are assumed to have SAD. However, recent research shows that there is an easily identified physiological reason for this disorder.

Light levels affect the brain and thus the rest of the body. In winter, our brains sense the lower light and respond by producing more melatonin. In the summer, just the opposite occurs. However, melatonin is not the only hormone affected by this change in light levels. Researchers used PET scans, a special technology allowing them to see the action of receptors in the brain, to look carefully at how the brains of people with SAD react to changes in light. They found that these people have more serotonin transporters in dark weather than normal people. These transporters remove serotonin from the bloodstream.

People who don’t get SAD have no significant difference in the number of serotonin between different seasons. Because serotonin affects a number of biological processes, from happiness to hunger, this may explain many of the symptoms of SAD. 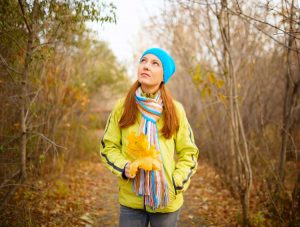 Seasonal affective disorder has long been treated with light therapy and melatonin. People with this disorder use light to convince their brains that it is still summer. Because light can affect melatonin levels, many also take melatonin at night so they can get the good night’s sleep that they need to feel rested during the day. Together, these can alleviate the symptoms of SAD for many people.

However, identifying serotonin as a factor in SAD opens up new possibilities for treatment. Those with more stubborn cases of SAD may benefit from taking selective serotonin reuptake inhibitors. Also called SSRIs, this common class of drug prevents serotonin transporters from working as efficiently, leading to higher levels of this necessary chemical in the brain and bloodstream.

SAD has long been identified in adults, especially adult women, but research suggests that children may fall victim to this disorder as well. SAD is more common than previously thought in children, especially in girls and those nearing adolescence. However, it presents differently in children. Children with SAD will often show signs of ADHD rather than classical signs of depression. Instead of being fatigued and depressed, they may seem agitated and have trouble paying attention. Identifying and treating these children will allow them to do better both at school and at home.

Seasonal affective disorder can often be successfully treated once identified, so learning to identify those who suffer from it can prevent a great amount of frustration and unhappiness. In addition, learning about the biological basis of this disease through chronobiology research is leading to better and more targeted treatments. Someday we may be able to identify and then treat this disorder more effectively so that people can enjoy all four seasons without unpleasant physical and emotional symptoms.