There has been a great deal of discussion in the medical world about the importance of chronopharmacology, or the practice of timing treatments and medications so they can be more effective and have fewer side effects. However, this is not a simple task because not all humans run on the same timing. Some people are night owls while others are morning larks. In addition, most of our organ systems and even individual cells have their own unique rhythms. What if there was a way to get detailed information about your internal clocks so your health care could be tailored precisely to your needs? New research on mapping the human chronobiome suggests that this technology may soon be an important part of medical care.

Researchers at Penn State decided to see if they could somehow map an individual’s individual internal timing, or chronobiome. Healthy volunteer research subjects wore a variety of sensors collecting data about their heart rate, blood pressure, body temperature and other factors. They also gave regular saliva and blood samples throughout their day. The researchers’ goal was to determine if an individual’s innate internal rhythm could be measured.

Why is this important? According to several recent studies, our internal clocks are crucial to our health. Our blood glucose, blood pressure and other important physiological traits vary throughout the day in a predictable rhythm. Timing may be crucial to adequately treat diseases such as diabetes and hypertension, but this will only be effective if we can time therapies for each individual’s unique rhythm. The results of the study were promising:  52 percent of volunteers had an oscillating rhythm that could be identified, mapped and used to predict their future fluctuations. 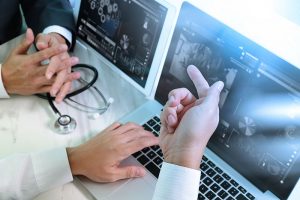 Researchers have been able to determine the chronobiome of test animals in a lab. However, this study is different because it was able to do so in humans who were out in their natural environment. The testing is not as invasive as one may initially think. The volunteers wore a watch-like device similar to an iWatch that measured activity levels and light exposure. Their smartphone GPS kept track of how active they were. They kept track of food intake as well as how they generally felt. There were also a few lab sessions to get a reading of how their activity matched up with cortisol, melatonin and other important hormone levels.

In most of the volunteers, a clear rhythm was apparent after just a few days of study. While this may seem like a great deal of trouble, it could be a breakthrough if any of these volunteers need medical care in the future for the many diseases that are linked in various ways to our internal clocks. Mapping a patient’s chronobiome may soon be a routine part of preventative care.

Benefits of Mapping the Human Chronobiome

Mapping the genome has led to immense advancements in medicine. We could never have predicted when the human genome was first mapped that we would be able to individualize health care so much using knowledge of an individual’s DNA. For example, it is now common to genotype cancers as this can be used to predict what kind of therapies will most effectively cure the patient. Mapping an individual’s chronobiome is similarly promising. With many of our most serious diseases being linked in recent studies to the circadian rhythm, knowledge can only lead to better treatment.

There are several ways that knowledge of your internal clocks can be used currently for important treatment even with the preliminary information that we have now. Research has found that asthma and high blood pressure both respond better to medications that are given at specific times. This is due in part to cortisol’s role in these diseases. Timing treatments to coincide with high cortisol levels may allow more people to get fully treated and avoid the serious damage that both diseases can cause. Similarly, there is likely a best time of day for you to have surgery, to get exercise and even to eat.

The Future of Chronobiology?

There may be a time in the near future when many people have their chronobiome mapped to individualize their therapies and treatments to their unique needs. In addition, this mapping may be able to identify when a person’s internal clocks are becoming dysregulated, which is an important warning sign. Collecting data and using it to customize treatments is called “precision medicine” and is quickly being adopted by the medical community. Identifying and customizing medical care for not just your genes but your internal clocks is likely in the near future for medicine. Although this may have sounded impossible just a decade ago, this technology may be in your primary care office in only a few years.