When it comes to what we want versus what we need, our sleep habits are no different and our unique sleep patterns are one of the areas where individual human behavior and biological needs vary the most. Although some people rise early in the morning naturally while others cannot fall asleep until midnight, as a general rule, most people need between seven and nine hours of sleep, but a small amount need as little as four hours. Even sleep disorders are as unique as the person who bears them. According to new research on sleep linked to genes, this may be due to a wide variety of inheritable factors that interact with environmental and behavioral cues.

How Is Sleep Linked to Genes?

There was a time when one’s hours of sleep were considered an indication of morality and work ethic. People who needed more sleep at night or the occasional nap were considered lazy. However, new research on sleep and genetics offers a very different explanation. Researchers bred fruit flies to have extreme sleep needs — one set of flies sleeping just three hours a day while the other for a whopping eighteen hours. This was accomplished with selective breeding of flies with certain sleep behaviors, without any fancy gene additions, deletions or modifications. The research team then compared the genomes of the two sets.

The results were surprising. Not only were the genomes of the two sets of flies different, but they were different in many areas. In fact, the two groups of flies had 126 significant genetic differences across 80 different genes. This suggests that sleep is influenced by a wide variety of genes on different chromosomes. However, there was one piece of good news: Neither set of flies had serious health problems or a shortened lifespan. Whether you need three hours of sleep or 18, you can maintain good health simply by getting the amount of sleep that you need to feel adequately rested. For most people, this is between seven and nine hours of uninterrupted sleep every night.

Night Owl or Morning Lark? The Difference May Be in Your DNA 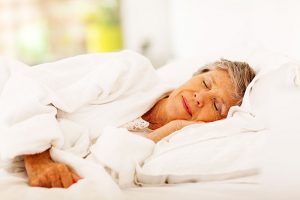 This study adds to a growing body of work suggesting that sleep is more genetic than we previously believed. Another study published last year identified two genes that appear to affect whether we are night owls or morning larks. CRY1 and BMAL2, both genes previously linked to the circadian rhythm, help to coordinate our internal circadian rhythms with cues from the outside world. When these genes are mutated or dysfunctional, people may find that they fall asleep earlier than others, or conversely, have difficulty falling asleep when bedtime arrives.

This small genetic difference can have a surprisingly large impact on human lives. When people’s bodies are out of sync with the rest of the world, they often cannot get the sleep they need at the times when their bodies are most primed to engage in it. The results are similar jet lag, except that they occur over a large range of time. This in turn can put people at risk of a variety of diseases such as heart disease and type 2 diabetes.

We tend to think of sleep disorders as a matter of behavior. In fact, many of the most effective treatments for these disorders are behavioral. However, there is considerable evidence that insomnia in particular is partially hereditary. It has long been noted that insomnia appears to be both due to heredity, environmental factors and behaviors.

Mothers in particular appear to be important in the development of insomnia. Researchers that put mothers and children through sleep studies found that the children of mothers with insomnia had trouble falling asleep and staying asleep. They awoke earlier and spent more of their sleep time in light non-REM sleep, which is the least restful phase. Although part of this is genetic, researchers also postulate that sleep behavior in pregnancy may somehow set lifelong patterns for a growing fetus.

Getting the Sleep You Need

Even if the cause of your sleepless nights is genetic, there are still proven ways to manage your circadian rhythm. Many of these interventions are safe and natural lifestyle interventions with no side effects. For instance, practicing good sleep hygiene has been found to help people with sleep disorders to fall asleep and stay asleep. This includes keeping a restful bedroom, turning off lights and screens before bed and avoiding doing any stressful activities in bed. Melatonin supplements that mimic the body’s natural melatonin release can also help people to increase both sleep length and sleep quality. If you struggle to get enough sleep or to feel rested, it is important to talk to a health care provider to get the treatment you need.

Is sleep linked to genes and heredity? The answer appears to be yes… and no. We already know of many genes that can determine factors such as how long you sleep and when you naturally feel like sleeping. It is likely that we will discover more about these genes and their effect on the human body in future research. However, behavior also can have an immense impact on your circadian rhythm. Sleep, like many other factors, appears to be a complex mix of both nature and nurture.