Night Owl Sleeping Patterns May be Due to a Gene Mutation

Are you a night owl? Scientists have discovered that people who function best in evenings and at night actually may have a genetic mutation causing their aversion to mornings.

We have all heard the phrase that the early bird catches the worm. While this may or may not be true, research has found that there are indeed such things as early birds and night owls. Early birds are people who naturally prefer mornings, while night owls struggle through the morning and come alive at night. While we all know these sorts of people, there is still much we do not know, such as what causes these different chronotypes.

The Problem of Being a Night Owl 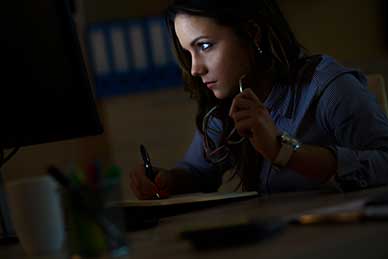 Being a night owl can be challenging in a variety of ways. Our world begins moving early in the morning, so those who are prone to hit the snooze button repeatedly may have trouble with their career and education. In addition, being an extreme night owl is actually a physical disorder, known as Delayed Sleep Phase Disorder (DSPD).

People who have delayed sleep phase disorder have a circadian rhythm that is geared much later than the rest of us. They are inclined to sleep much of the morning and then come alive in the evening, often unable to sleep until late night and early morning hours. This is not a rare disorder by any means, affecting around 15 percent of people. This disorder can have serious results when people are forced to live outside of their circadian rhythm. They are almost guaranteed to live with fatigue, insomnia and other sleep disturbances. Sleep disorders and circadian misalignment leads to a higher risk of cardiovascular disease, type 2 diabetes and mental illnesses such as depression and anxiety. People may try to make up for their lack of sleep at night by napping or sleeping late on weekends, but this often makes it even more difficult to maintain a healthy circadian rhythm in the long run.

What Makes You a Night Owl?

New research in chronobiology indicates that a gene mutation may be responsible for the high rate of DSPD and being a night owl in a general. People who have a hereditary form of delayed sleep phase disorder have been found to have a mutation in CRY1, a key circadian clock gene. This gene helps cells and tissues to align themselves with environmental cues to keep our circadian rhythm in tune with the outside world. It also interacts with other well known circadian genes such as BMAL1, so its deletion may affect many other timing related processes. At this point, the research is clear: When CRY1 is mutated and thus less functional, a person’s circadian rhythm may become out of tune with the outside world.

Are You Out of Sync?

If you are a night owl or otherwise have trouble getting up in the morning, there is hope. Researchers have found that taking melatonin before your desired bedtime can make it easier for night owls to fall asleep at a reasonable hour. In addition, it is important to get up at the same time every morning. While it may be tempting to make up for lost hours of sleep with a nap or a weekend sleep-in, this actually will disrupt your circadian rhythm even more. Finally, try to make your life fit into your circadian rhythm whenever possible. Schedule meetings and important events for the afternoon or evening, times when night owls are performing at their best.

Society once considered people who slept in to be lazy and unmotivated. However, these people may simply be suffering from a genetic mutation. While there is no way to permanently treat being a night owl, there are ways to make your life and your circadian rhythm go together more harmoniously.