Weighted blankets may be a valuable tool in the quest to improve sleep, a key element of optimal health. According to research recently published in the peer-reviewed Journal of Sleep Research, weighted blankets influence melatonin production. In their study, the Uppsala University researchers found that using a weighted blanket could yield an approximately 30 percent increase in melatonin levels.

Melatonin is a hormone produced by the pineal gland after dark. While it does perform a number of important functions in the body, melatonin, often called the sleep hormone, is perhaps best known for its role in promoting sleep. 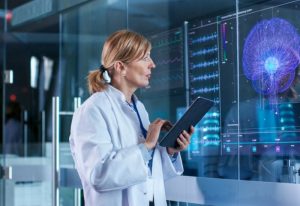 The recent study involved 26 carefully screened subjects: 15 men and 11 women. All were young, healthy adults, non-smokers and maintained a normal body weight. The women in the study all used hormonal monophasic contraceptives, reducing the potential for the hormonal fluctuations of the menstrual cycle to impact study results.

Potential participants were carefully screened to eliminate those with chronic diseases, mental health conditions, prior regular weighted blanket use, a habit of sleeping without using covers, poor sleep habits, extreme chronotypes, sleep disorders, drug use, excessive alcohol or caffeine use and circadian rhythm disruptions due to recent multiple time-zone-crossing travel.

The Uppsala University researchers noted that this study was the first to focus on the potential for a weighted blanket to increase melatonin levels. While they were able to establish the increase in melatonin, more research will need to be done to gain a deeper understanding of the specific mechanisms involved. However, there are theories on how weighted blankets may influence the production of melatonin.

Associate pharmacology professor at the Department of Pharmaceutical Biosciences at Uppsala University and lead author on the study, Christian Benedict, suggests that the weighted blankets may offer a more amplified external cue, as compared to normally weighted blankets, that the time for sleep is approaching, signaling the need for melatonin production to increase.

Medical director of Sleep Fit Medical Sleep and Weight Management Center in Sonoma, California, Dr. Rafael J. Sepulveda, had no involvement with the Uppsala University study, but did offer some additional insight concerning potential mechanisms. As explained by Sepulveda, the significant increase in melatonin levels associated with weighted blanket use may have to do with deep pressure stimulation from the weight of the blanket, yielding a decrease in sympathetic neuron stimulation.

Melatonin is produced by the pineal gland and has a role in regulating timing of certain functions throughout the body. It helps to regulate sleep-wake timing by helping us to feel sleepy and, via its influence on the overall circadian rhythm, has a part in helping to keep circadian clocks throughout the body in sync.

When melatonin production is delayed or suppressed, sleep timing is directly impacted. That can lead to sleep deprivation and poor sleep quality, both of which are associated with increased risk of numerous diseases and chronic health conditions.

Incorrectly timed light exposure is one common way that melatonin production is suppressed or delayed. Because this hormone is produced in the dark, exposure to bright artificial lights and the blue light emitted by electronic devices such as mobile phones, tablets and computers can disrupt or delay that production. However, in our modern, urban lifestyles, it can be quite difficult, even impractical, to completely eliminate evening light exposure.

Considerations Before Using a Weighted Blanket

Weighted blankets are recognized as generally safe and have been shown by this recent Uppsala University study to be associated with significantly increased melatonin production. However, there are some people that should not use weighted blankets. They should never be used for infants and toddlers because they can get trapped underneath them and, unable to free themselves, they can smother. People with certain types of chronic respiratory problems, severe circulatory issues and obstructive sleep apnea may not be able to use weighted blankets, as they could interfere with breathing or circulation. With these sorts of health problems, it is essential to talk to a primary care physician before using a weighted blanket.