New research is suggesting that light color may be as important as light intensity when it comes to regulating the sleep-wake cycle.

Sunlight is not always pure white light, even though it appears this way. Throughout the day, light hits our atmosphere at different angles, producing slight color changes. While we only rarely notice the mild and gradual change in light color, our eyes register it. This is transmitted to our brains as a cue to the time of day. Researchers have only just begun to understand exactly how our bodies respond to differences in light color. 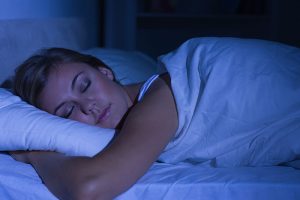 Blue light is one of the most studied wavelengths of light. Blue light, which is sensed by melanopsin receptor cells in the retinas of the eyes, causes even more activity in areas of the brain that govern the circadian rhythm. Not only does it affect sleep-wake cycles by encouraging wakefulness, but it also increases production of cortisol. Cortisol is a well-known stress hormone, but it is also naturally produced in the body to promote wakefulness and alertness.

What happens to our brains when we cannot sense blue light? A study of mice suggests that this light color is an important regulator of the circadian rhythm. When mice were bred to lack the melanopsin receptor of the eye that perceives blue light, they reacted by producing less cortisol and more melatonin. In addition, they showed less light aversion, which means they sought shady areas less. Clearly blue wavelengths of light can affect your circadian rhythm, but what about other colors?

Green light appears to have a very different effect on mice, as seen in a recent study. When mice are exposed to green light, they begin acting sleepy and preparing for slumber. When their light color sensing melanopsin receptors are knocked out, they have the exact opposite reaction, becoming more wakeful. Without perceiving the color of the light, mice appear to see only light and react by preparing to stay awake.

Until recently, light was believed to be the major governor of the sleep-wake cycle. However, these new studies are flipping these ideas on their head. Previous research has found that many different kinds of animals have receptors in their eyes that perceive different colors of light, suggesting that this feature is more universal than previously thought. The very different reactions to different colors of light suggest that the relationship between light and sleep is more complicated than we could have predicted.

There are several ways that this new information can be applied to human health. While we have traditionally used white light as light therapy, other wavelengths may be a better choice. In addition, avoiding certain light colors at different times of day may help people to change their sleep-wake cycle and modify their circadian rhythm when needed, such as after changing time zone. New discoveries in circadian biology are promising to offer hope for those who struggle with sleep disorders.