Not Getting Enough Deep Sleep Linked to Alzheimer's

Most modern people are familiar with the cognitive and psychological effects of insomnia. When you have not had enough sleep, you simply do not perform as well. People who have not had enough sleep — particularly restorative deep sleep — do worse on tests, have trouble remembering even basic information and can suffer from more intense ranges of emotion. According to recent research, those sleepless nights may also contribute to diseases such as Alzheimer’s that can cause a more permanent decrease in cognition and memory.

The Challenges of Sleep in Old Age 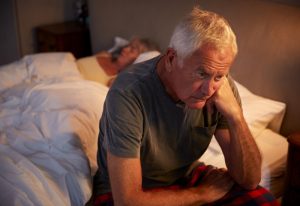 The aging process can affect every organ and system in our bodies. Our circadian rhythm appears to be especially impacted by age-related changes. Getting enough sleep, especially deep sleep, is a challenge for many people in their golden years.

Older people tend to fall asleep earlier in the evening and wake up much earlier. This in itself is not a problem, but there are other, more pathological changes that can occur in old age. People in old age tend to sleep more lightly, with fewer and shorter periods of deep sleep and REM sleep. They awaken more often throughout the night and have more trouble falling asleep once again.

This can have devastating effects on the health and the daily function of older Americans. Older people are more likely to be impacted by the negative effects of insomnia, such as fatigue, decreased memory and increased accidents.

Although some changes in sleep are inevitable, scientists believe that many age-related sleep issues are preventable. Elderly people are more likely to suffer from medical and psychological conditions that cause insomnia. They are also more likely to take medications that impact sleep. Addressing these health issues can help people of all ages to sleep more soundly. According to a new study, getting this sleep-saving health care may be especially important for reducing the risk of Alzheimer’s disease.

Many people struggle to get quality sleep as they age. This is particularly true for people with different forms of dementia, including Alzheimer’s disease.

Alzheimer’s disease is one of the most feared age-related illnesses. People gradually lose not just their ability to function in daily life, but their memories as well. One lesser-known effect of this disease is its effect on sleep. People with this disease suffer from many sleepless nights and have worsened effects in these hours, a phenomenon known as sundowning.

In a recent study, researchers looked at the brains of more than 100 people aged 60 and over. 80 percent had no cognitive decline. Researchers measured the levels of different markers of Alzheimer’s disease and monitored their sleep carefully.

People who had less deep sleep throughout the night had higher levels of Tau protein in their brains. Increased Tau proteins are linked to Alzheimer’s disease and believed to cause much of the cognitive decline associated with the illness.

It is difficult to tell if the lack of deep sleep caused the build-up in this protein or if the sleep changes are merely a symptom. Although more studies will be needed to determine the nature of the correlation, it is clear that a lack of deep sleep is somehow linked to developing Alzheimer’s disease.

Reducing your Alzheimer’s risk is not the only reason to keep your internal clocks on track. Numerous studies have linked insomnia to serious physical and mental changes. People who do not get enough sleep suffer from mental issues such as lower cognitive function, memory loss and increased depression. They are more likely to get in serious accidents on the job and in vehicles. They also are more likely to develop hypertension, heart disease and stroke. Even a few sleepless nights can decrease your immune system, making you more likely to get sick.

Getting the right quantity and quality of sleep can be a challenge. However, it is a challenge that is essential to long-term, whole-body health.

Getting the Sleep You Need, at Any Age 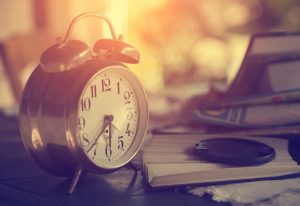 High-quality sleep depends on a functioning circadian rhythm. Regardless of your age, you should go to sleep and wake up at the same times every day. Before you go to sleep, turn off lights and screens to encourage your brain to produce melatonin, the hormone that contributes to sleep. During the day, make sure you get plenty of exposure to high quality natural light, as this cues your body to release hormones associated with wakefulness.

Part of maintaining a healthy circadian rhythm is maintaining overall good health. Almost all lifestyle changes that help you to stay healthy will also help you to sleep well. The modern world was not designed to support optimal health, so this can require changes. However, the benefits of a good night of sleep will make the effort more than worth it.