Depression, the most common mental disorder in the world, appears to be linked to sleep disorders and altered melatonin levels.

Around 6.7 percent of American adults have a major depressive episode every year, making depression one of the most important public health issues of our time. Sleep disorders are considered one of the major symptoms of depression, but they may be a cause as well. The link between depression and altered sleep is so strong that depression can even be predicted by salivary melatonin levels.

Depression is not just sadness, but a mental disorder that affects every aspect of a person’s existence. Symptoms include pervasive sadness, apathy, fatigue, insomnia and changes in appetite. A disturbance in serotonin activity appears to be the main cause, which is why doctors often treat depression with drugs that increase serotonin levels. However, other neurotransmitters such as dopamine, norepinephrine and melatonin appear to be involved as well.

Like many mood disorders and mental illnesses, depression appears to be linked to sleep. Insomnia and fatigue are two important symptoms of the disorder, but they may be partial causes of it as well. When people don’t get enough sleep or sleep at the wrong times, their bodies cannot clean waste products from the brain as effectively, or maintain a healthy balance of neurotransmitters. In people who are susceptible to depression, this may be the trigger for a major depressive episode. During these episodes, insomnia and fatigue may worsen, creating a downward spiral that is difficult to treat. Depression remains one of the most difficult illnesses to treat, despite its high prevalence.

Melatonin: A Predictor of Depression Severity? 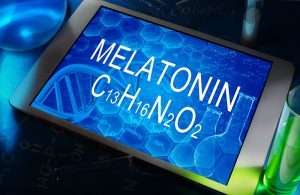 The link between melatonin and depression has been conclusively proven in a recent study. People gave saliva samples that were tested for melatonin, a common way to test levels of this neurotransmitter. They then were evaluated for depression. Melatonin levels were so correlated with depression severity that they could actually be used as a reliable predictor. This may offer a lab test for depression, something that medical researchers have tried for decades to develop.

If melatonin levels can predict depression, this sleep hormone may be more important to the disease than previously believed. Even serotonin levels are not an accurate predictor of the disease. Melatonin analogs are currently being studied as a treatment for depression, showing a great deal of promise. Getting a solid night of sleep may be the best treatment for many people suffering from debilitating mood disorders.

Depression can be very difficult to treat because there are multiple factors involved and no one pathophysiological cause. New approaches are important because they may positively affect the lives of millions of people suffering from this mood disorder. Melatonin appears to be a piece of the puzzle in effective treatment of major depressive disorder.