Most people are aware of the many factors that contribute to weight gain and obesity such as poor diet and lethargy. However, science has now correlated an inadequate amount of sleep is a key factor in becoming overweight.

All Age Groups are Effected by Lack of Sleep

Obesity is a continually growing epidemic. The Centers for Disease Control states approximately 35 percent of adults and 17 percent of children (ages 2-19) in the United States are overweight or obese. Scientists are looking at long-term patterns to uncover all factors that are contributing to the increasing number of overweight and obese children, teens and adults. New evidence points out a correlation between lack of rest and an increase in body mass index, or BMI, over time.

For generations, children were put to bed early each night because pediatric groups agreed that they needed rest after long days of play for proper development and growth, as well as for strong immune systems. Adults and adolescents need a full night’s rest to function at full capacity at work and school. Now studies are finding that proper amounts of repose are required to maintain a healthy weight.

Every year scientists learn more about the human body. Chronobiology, a growing field in the scientific community, is a field of biology that studies our body’s natural cycles. The most recognized rhythm in humans is a 24-hour cycle of our physiological processes called the circadian rhythm. When this delicate rhythm is disrupted, the most noticeable side effects that a person encounters are a lack of alertness and the perpetual feeling of being tired or drowsy. Now we are learning that there may be a long-term consequence that is not immediately noticed: weight gain.

What Research Says Links Your Zzzs to Your Weight 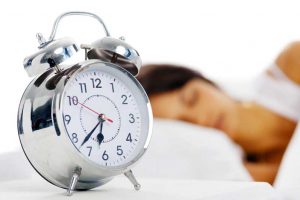 The National Longitudinal Study of Adolescent Health looked at 3,300 youths and adults in the United States from 1994 to 2009. They found correlations between their subject’s bedtimes and their BMI. Researchers concluded that teens are not getting the 9 hours of recommended shuteye that they require and that this disruption of their biological processes makes it difficult to stay alert and awake at school. They also found that those who went to bed later were more likely to have a higher BMI. For each hour lost, the subjects gained 2.1 points on the BMI index. To calculate your BMI or learn about normal BMI indices, click here.

Another study by the University of Chicago found that continual deprivation of one’s repose over a period of days can interrupt hormone levels and disrupt their metabolism. In the study, they restricted the hours of rest of 11 healthy adolescents to between four and six hours per night for six nights. Their findings showed that the adolescents’ ability to process sugar in the blood had declined. Scientists in the study attest that the lack of repose causes fatigue and causes leptin—or the hormone that suppresses hunger—levels in the body to fall. When leptin levels decrease, it signals your body that it needs to eat. The increased hunger then leads to overeating and subsequently, weight gain.

The Harvard School of Public Health asserts that dozens of studies across five continents have researched the link between bedtimes and obesity, but the most convincing studies were longitudinal (meaning they span over a long time period). The largest and longest study to date followed 68,000 middle-aged women. It was called the Nurses’ Health Study. American women with irregular or rotating work schedules that disrupted their sleep schedule were studied. Researchers found that the longer the nurses worked an irregular schedule, the greater their risk for type 2 diabetes and obesity.

With mounting evidence to support the correlation between lack of substantial rest and weight gain, there is no harm in encouraging more sleep to benefit the public’s health. We are simply not taking care of ourselves like we should be. Modern lifestyles have become so hectic that we rush through each day only to get to bed late and start the cycle again the following day. This is detrimental to our health. We should listen to the advice of medical professionals and take measures to get ourselves and our family to bed earlier. By creating good habits and routines, our bodies can normalize and function properly. In the long run we will be improving our health and longevity. Moral of the story: catch your Zzzs.