What Mechanisms Cause You to Become Sleepy?

While we are all familiar with the feeling of being sleepy, we are only just beginning to determine which neurons and which areas of the brain induce this feeling.

Most people reach a point in the evening when their eyes become heavy, their brains foggy and their bodies exhausted. We begin to slow down, to yawn and to seek a place to rest. Shortly thereafter, we fall asleep. This behavior can be seen in almost every animal. A new study on fruit flies may finally explain exactly what brain process underlies this almost universal feeling.

Many discoveries involving the human genome and the human brain begin with studies of the fruit fly Drosophila. Drosophila is a much simpler organism than a human and has a much smaller generation time, making it easy to study. Despite the obvious differences, the brains of fruit flies work in much the same way as human brains, and their genome has striking similarities to our own. Previous research using Drosophila has led to discoveries about limb development, eye development and neural function that apply to humans and other more complex mammals.

In order to discover exactly how we become sleepy, scientists modified the brains of Drosophila flies so certain genes turned on only in response to heat. This allowed them to easily turn certain neurons of interest on and off to see how this affected the flies’ behavior. It became clear that a certain group of neurons, called R2 neurons, in the ellipsoid body of the fruit fly brain were likely the neurons that induce that familiar sleepy feeling.

How Do We Get Sleepy? 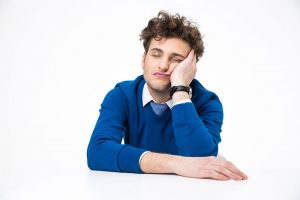 When R2 neurons were activated with heat, the fruit flies became sleepy and fell asleep. The neurons appeared to have this sedative effect even for hours after they were turned off. Researchers believe that these neurons may merely be the trigger for a longer process of becoming sleepy and falling asleep.

The researchers then engineered R2 neurons that produced the tetanus toxin when activated, which kept them from communicating with other neurons. The result was that sleep-deprived flies, which normally sleep longer due to exhaustion, slept far less. This indicates that some of the fruit fly’s ‘sleep drive’, and ours as well, is created or initiated by these neurons. In other words, fruit flies are sleepier when these neurons can communicate with other neurons in the brain.

More studies will need to be performed before we understand how these neurons work and exactly how they contribute to our perception of being sleepy. However, this is a huge leap forward in circadian biology research. Many people who suffer from insomnia become very fatigued but not sleepy. When we know exactly how we become sleepy, we may be able to design treatments that help insomniacs to fall asleep easier and get the rest they need. For now, more research will be performed to find out whether R2 neurons perform a similar function in the human brain.

Even something as basic and natural as becoming sleepy can be crucial to human health. This feeling induces us to get the rest we need for good health and cognitive function. While we are not fruit flies, studying these tiny little insects may eventually improve the lives of the millions of people who struggle to fall asleep.