Scientists have identified a new type of depression that may be caused by a specific protein in the body that’s related to sleep regulation. These findings may lead to the development of new treatments for those who suffer from depression that is not responsive to traditional medications.

In their latest report on the growing depression epidemic, the Worldwide Health Organization shared findings that indicate more than 300 million suffer from this particular mental illness. What makes this news so much more alarming is that the development of depressive symptoms can lead many to turn to suicide instead of therapy. Even in cases where the individual does seek help, medical treatment is sometimes ineffective and the patient may end up feeling there’s little reason to hope for relief.

To those who don’t suffer from depression, they may conclude that this mental illness is simply a state of feeling sad. However, grieving over specific life events is an entirely different condition than clinical depression. When a person experiences the mental illness of depression, every aspect of their lives will be affected. They may end up becoming reclusive to the point of losing their jobs or sabotaging their personal relationships.

In addition to a sadness that can last several days at a time, the individual may lose interest in activities that normally make them feel happy and may experience anxiety attacks. Physical symptoms of depression include frequent headaches and the development of sleep disorders.

All Patients Do Not Benefit From Traditional Treatment

The American Psychiatric Association reports that nearly 30 percent of patients don’t respond well to the drugs typically used to treat depression. This leaves far too many people suffering from depression without any chance of alleviation of those symptoms, so researchers have been motivated to look at the reasons for this disparity. 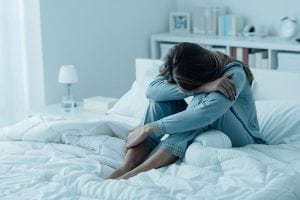 The results from one study at Hiroshima University in Japan were recently shared in the publication Neuroscience. This research project uncovered a reason for the ineffectiveness of medication in some cases of depression, and that is that there may be a new form of depression linked to the RGS8 protein, which is produced by the RGS8 gene in human beings. The function of this protein is to control how a specific hormone receptor, MCHR1, functions in regard to regulating mood, sleep and appetite. The study found that when RGS8 is present, it renders MCHR1 inactive in cultured cells.

One method the research team used was to test the activity levels of mice with depression. Before making any changes, they put the test mice through a swimming course to measure the physical activity of each mouse. The amount of time that each mouse was active was then deducted from the total time of the testing period. This helped the researchers learn how much time the mice were normally inactive. The study found that mice with lower RGS8 proteins were more active than those with a higher supply of the protein.

Researchers followed up their study by administering an antidepressant drug to some of the mice and a drug that prevented the functioning of the MCHR1 hormone receptor in the other mice. Periods of inactivity became shorter in mice given the antidepressants, but periods of immobility were not affected by the drug given to the other mice. This indicated that it’s the quantity of RGS8 specifically that influences this particular kind of depression. These early findings urged the study to focus more directly on how the RGS8 protein affected cells in the brain.

Treating a New Type of Depression

Next, researchers wanted to see how the correlation between MCHR1 and RGS8 affected the cilia of certain cells in the brain. Cilia resemble hairs protruding from certain cells and are especially present in cells in the hippocampus. Those cells, which are designated as CA1 cells, contain the highest concentrations of RGS8 in the body.

To simulate a higher presence of RGS8, researchers injected the mice with a drug that inhibited the functioning of MCHR1. This caused the cilia to grow longer and, referring back to studies done previously, we know that abnormally formed cilia have been linked to retina disease, obesity, kidney disease, and many other health conditions.

What does this mean for those patients of depression who don’t normally respond to drug treatments? The study results indicate that this new type of depression may be successfully treated by manipulating the development of RGS8 in the body. If future studies can pinpoint the relationship between RGS8 and depression more concisely, they may be able to develop new drugs that will be more effective in treating this kind of depression. The promise of a new treatment for depression suggests that people will no longer have to live with the condition and suffer its symptoms. As this research is put to the test and results in new drug therapies, millions of people have the hope of a treatment that resolves depression by attacking the underlying cause.