In this new study, scientists at Washington State University shifted the biological rhythms of mice to see how this affected them. The mice were placed in an artificial laboratory environment that had a 20-hour day. Like most living creatures, mice normally run on a circadian rhythm, which is a roughly 24-hour clock.

This change was made to settle a controversy in the world of chronobiology as to whether timing mattered as much as sleep duration. Until this study, researchers had trouble separating the two factors, as people who live on a non-24-hour rhythm usually do not get enough sleep.

Sleep: A Time to Heal

Sleep is not just a time to rest, but a time for the body to restore itself. Sleeping at the wrong time can affect these vital processes just as seriously as sleep deprivation. The mice in this study woke up much more often, and also showed abnormal brain wave activity. The brain appeared to spend less time in restorative sleep, suggesting that many processes in the body are affected when circadian rhythms go off kilter. 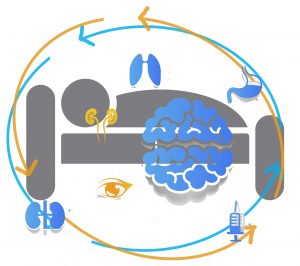 When exposed over weeks to a shorter day, the mice had to sleep at hours that changed constantly and that were not always in tune with environmental cues. The results were surprising: These mice were more likely to become sick when exposed to illness and less able to effectively fight off their sickness. In addition, they tended to have more symptoms, as their bodies overreacted to the illness even while fighting them less effectively.

The mice who lived in a laboratory with a shorter day were still getting the same amount of sleep, so sleep deprivation could not have caused these effects. The lower immune system and other effects were entirely caused by poor sleep timing.

While few humans will encounter the conditions that these mice went through, there are definitely ways that many modern people can disrupt their circadian rhythm in a similar manner. Have you ever stayed up late to watch a show on a regular basis? Slept in on weekends? Flown to another time zone? These and other actions that change the time we sleep and wake can have a detrimental effect on our internal clock. This leaves us at risk for higher rates of illness and other ailments, just as if we didn’t sleep enough.

If you are trying to get better sleep to improve your health, this study can offer new insight. People should focus not just on the amount of time that they sleep, but also on setting and maintaining a sleep schedule that will allow their body to truly rest.