Unraveling the Mysteries of our Biological Rhythms: The Suprachiasmatic Nucleus

The suprachiasmatic nucleus, or SCN, is considered the “master clock” of the human body. Understanding the SCN is key to unlocking the secrets of the body’s internal clock.

The suprachiasmatic nucleus is the source of our innate biological rhythms, coordinating a variety of physiological processes to environmental levels of light and dark. Despite its importance, little was previously known about how this area of the brain receives and synthesizes information. However, scientists are beginning to understand more about the workings of our internal clocks thanks to a new study using a neurotoxin from a surprising source – the pufferfish.

The Timing of Your Brain

When your retinas sense light, they pass information to the vision centers of your brain. However, they also send messages to an area of the hypothalamus called the suprachiasmatic nucleus. Located just above the optic chiasm, this small section of the hypothalamus is paired (one on each side) and shaped like a wing. Like most areas of the brain, the SCN is packed with neurons. These neurons receive signals from the eyes, process them and send signals that keep the brain and body running on the same schedule.

The suprachiasmatic nucleus is intimately involved in the production and release of hormones, your sleep-wake cycle, temperature regulation and a variety of other important physiological tasks. When this area is compromised, such as in degenerative brain disorders like Alzheimer’s disease, the result is a disturbed circadian rhythm and resulting loss of normal sleep patterns.

The SCN and Your Internal Clocks

Unfortunately, it has been difficult to determine exactly how the SCN works because its complex interworking’s connected with several different activities. Each cell in this area of the brain generates its own rhythm with every ‘tick-tock’ of the body’s internal clock. Referred to as “micro-rhythms,” these add up together to control your biological rhythm in a variety of ways. In the absence of light, the pineal gland is induced to produce melatonin, whereas in the presence of light, the brain induces the adrenal glands to make cortisol. These hormones also interact with metabolism, allowing the body to coordinate activities with wake and sleep. The constant busyness of the SCN makes it difficult to measure activity due to constant ‘noise’. 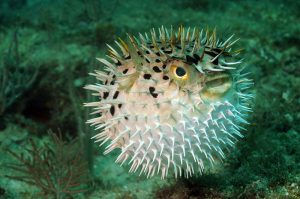 To isolate the activity of the suprachiasmatic nucleus, scientists used a neurotoxin from pufferfish to stop communication to and from the region. This toxin blocks sodium channels in nerve axons, which stops them from sending messages to other areas of the brain. When input to and output from the SCN was blocked, the pulse-like oscillating activity of this area of the brain became chaotic and unpredictable. When the neurotoxin was removed, the suprachiasmatic nucleus resumed oscillating in a predictable pattern. It appears that neurons in the center of the organ set the rhythm, sending messages in a patterned matter to the neurons around them and a lesser extent to further ones.

What does this mean for future chronobiology research? Now that scientists understand the way the neurons in the SCN are connected, they will be able to figure out more about how this enigmatic part of the hypothalamus governs so much of our physiology. This understanding in turn can lead to better treatments for people who suffer from circadian rhythm disorders and other disorders affected by this tiny section of the brain.