Could an infection hit you hardest if you’re exposed at certain times of day? New research suggests circadian rhythm affects the immune system.

Infections and the Circadian Rhythm

In order to determine the relationship between our sleep-wake cycle and our rate of viral infection, researchers exposed different groups of mice to viruses at different times of day. Those who were infected in the morning had a higher rate of virus replication—ten times as high! On the other hand, those who were infected later in the day had lower rates of infection. Cultures of human cells showed the same results.

To ensure that circadian rhythm really was responsible for this difference, researchers then bred mice that had their BMAL1 gene silenced—a crucial gene in circadian rhythm. These mice had higher rates of infection regardless of what time they were exposed to the virus.

How Can Your Sleep-Wake Cycle Affect Illness Susceptibility?

Other studies have explored the effect of sleep on the immune system. People who are sleep-deprived are more susceptible to illness. In addition, people who work shifts at odd hours tend to have an altered immune response. Why are we are more susceptible to infections when our circadian rhythm is off-kilter? Immune memory, a crucial part of our immune systems, appears to be the answer.

When we encounter a pathogen, or a microorganism that can cause illness, memory T cells “memorize” the invader. When we encounter this same pathogen again, T cells can mount a rapid response because they recognize the troublemaker. This allows us to fight off infections faster, often before they can even cause symptoms. Memory T cells increase in numbers in response to slow wave sleep, also called deep sleep. Lack of sleep or altered sleep-wake cycles can prevent the body from forming these infection-fighting T cells. The season of the year also plays a role, likely due to the role of a gene called ARNTL. This gene is more active in summer months and appears to protect against inflammation.

Is Sleep Really the Best Medicine? 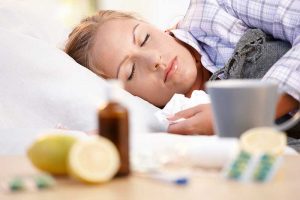 Sleep has been called the best medicine, and this new research appears to support that. Being exposed to illness after many restful nights makes it more likely you can fight it off successfully. In addition, disturbing sleep and the genes associated with circadian rhythm appears to increase likelihood of infection.

We already know that we need to sleep more, but this new study may be used to treat illness in other ways. It is possible that this knowledge can be used to create a new drug that will be effective against a wider range of organisms by modifying the expression of certain circadian rhythm genes. Professor Reddy, who headed up the latest study on mice, stated

Given that our body clocks appear to play a role in defending us from invading pathogens, their molecular machinery may offer a new, universal drug target to help fight infection.

Treating infections is one of many challenges in modern medicine. This new research in circadian biology may help us to prevent and treat infections more effectively in the future. Understanding more about how we can reduce infections and how we can treat them when they do occur will allow people to spend less time ill, while also lowering rates of fatal disease.