Circadian rhythms, or internal 24-hour biological clocks, are the subject of many current research trials. Scientists are only beginning to discover the effects of light and dark cycles on the human body, which comprise a new field of biology called chronobiology. The latest research shows that these internal clocks control not only our moods, energy levels and hormones, but our skin health as well.

The Internal Clocks of Skin Cells

Many functions of circadian rhythms are controlled by the suprachiasmatic nucleus of the brain. However, many different cell types have their own internal clocks. These clocks create waves in activity according to the time of day. Skin cells also have these clocks. Stem cells in the epidermis reproduce mainly at night, creating new skin cells that replace aged cells and reduce the appearance of aging. In addition, DNA repair occurs mainly during specific times of day, which is important because this is the body’s first line of defense against UV damage and skin cancer.

Because skin cells are engaged in different activities during different parts of the day, they are also more sensitive to damage at certain times. Understanding the circadian rhythm of skin cells may be an important way of preventing both premature aging and skin cancer.

CLOCK Genes and Your Skin 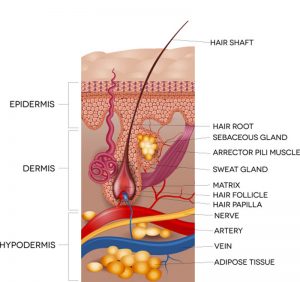 The latest research indicates that CLOCK genes, previously identified in other cell types, are the likely gene affecting the internal clocks of skin cells. The epidermis plays an important role in health. It separates our vital organs from the damaging influences of the outside environment, including UV rays, chemicals, oxidation and mechanical stress. The CLOCK genes in epidermal cells appear to anticipate times of greatest stress and schedule repairs.

It appears that DNA repair in skin cells occurs in the afternoon and evening. These are the times when skin is most likely to be exposed to direct UV rays. This is followed late at night by epidermal stem cell proliferation. It is believed that proliferation occurs at night because this is the time when these delicate processes are less likely to be interrupted or disturbed. The result is that DNA damage in the morning and night, especially UV damage, is less likely to be repaired in a timely manner, while people who are up late exposing their skin to light and chemicals such as alcohol and tobacco may suffer premature aging.

Effects of Circadian Rhythms in Skin

Before CLOCK genes were discovered, scientists had already observed that skin condition varies predictably over a 24-hour cycle. For example, women routinely rate their skin as more attractive in the morning rather than the evening, which we now know is likely due to the proliferation of new skin cells at night. In addition, anti-aging creams have been proven to be more effective when used before bedtime.

Furthermore, skin appears to be more sensitive to inflammation at certain times of the day. The symptoms of atopic dermatitis are worse at night, which is also when psoriasis is most severe. People who get allergy tests and tuberculosis skin tests are less likely to test positive when the test is given in the morning rather than the afternoon or evening.

Is Timing the Key to Prevention? 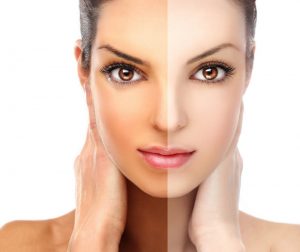 Although the study of the skin’s circadian rhythm is still in its beginning phases, it is possible that this knowledge can be used to better prevent and treat skin disorders. For instance, psoriasis and dermatitis medications may be most effective when given at night as this is the time when flare-ups occur. If people must be out in unblocked UV rays, they can plan to do so in the afternoon or early evening. Skin cancer treatments such as chemotherapy may be most effective when planned to coincide with the most effective times in the skin cell cycle.

Chronobiology is an emerging field that is proving to be more and more important in human health. Understanding CLOCK genes and their effects on skin cells may be an important way of preventing skin cancer, premature aging and a variety of skin disorders.