The field of chronobiology – the study of biological rhythms – has greatly expanded the understanding of the roles of rhythm and timing in the health and functioning of body and mind. Our complex bodily systems developed over time, evolving under the pattern of the skies: the cycle of day and night. Throughout the majority of human history, we were active during the day and rested at night. Our bodies and minds evolved according to this roughly 24-hour circadian rhythm that influences near countless processes through a variety of timekeepers throughout the body. These timekeepers include circadian clocks in muscle tissues that govern energy efficiency and response to exercise. 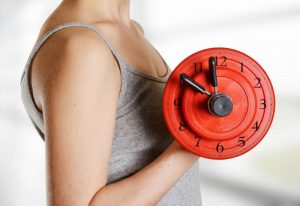 According to the results of a study conducted by Northwestern University researchers and published in Cell Metabolism, a peer-reviewed journal, muscle tissues have circadian clocks that help determine the muscle’s energy efficiency and metabolic actions during physical exertion. The researchers explain that this finding accounts for time-of-day differences in how muscles perform and use energy during physical activity or exercise, linking those differences to the overall circadian rhythm and the natural rhythm of activity. In their study, they used mice, which are nocturnal creatures, so their natural rhythm is to be active at night, resting during the day.

Cells have an approximately 24-hour cycle of activity, shaped by the circadian rhythm’s influence over the body’s timekeepers, including body clocks, clock genes and the circadian clocks in muscle tissue. Using the muscles during exercise changes the environment in the cells that make up the muscles, upping the need for energy to fuel the activity.

During periods of low activity, muscle cells use oxygen to create energy. During more demanding periods of physical activity, the need for energy increases, outpacing the available oxygen for producing that energy. At that point, when oxygen is low in the cell, Hypoxia-inducible factor (HIF) proteins come into play, signaling a changeover to using sugars to fuel the cell’s energy requirements.

In the mice muscles, this process of adapting to the changing cellular environment due to the demands of exercise and the efficiency of the cell’s response to increased energy demand were more efficient during the active period of the overall circadian rhythm and less efficient during the period of the circadian rhythm when the mice would normally be at rest.

Aside from having mice run on treadmills at different times of the day, the researchers also used genetic experimentation to cause changes to the muscle’s circadian clock. Disrupting that circadian clock yielded serious muscle abnormalities, pointing to the role of the circadian clock in the healthy form and function of muscles, also confirming the findings of an earlier study that found that mice with disrupted skeletal muscle molecular clocks were more likely to have weak, poorly developed skeletal muscles.

The strongest environmental cue for the overall circadian rhythm is light. However, this fundamental rhythm is also impacted by meal timing and physical activity, such as exercise. In fact, for people trying to reset a disrupted circadian rhythm, exercise can be a valuable tool and has a direct impact on skeletal muscle clocks.

Mouse Studies Have Meaning for Humans

Researchers use mice in many studies because, despite the difference in active periods, they have a lot in common with humans when it comes to genetics and the mechanical inner workings of the body. The genes, molecular clocks and other structural elements that come into play during the process of muscle use, energy production and metabolism are similar to those of humans. While there is a lot that can be learned about the mechanics of these processes, further research is required to see exactly how these results and the theories arising from them may apply specifically to humans.

The Importance of Circadian Rhythm Health is Clear 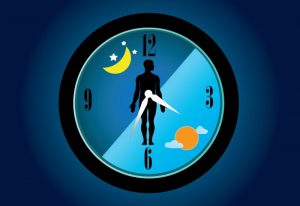 What is readily apparent and immediately applicable to human health is the importance of maintaining a healthy circadian rhythm. While there is still much to learn about the mechanisms involved, it is clear that circadian rhythms impact health and function throughout the body, with peripheral tissues having their own circadian clocks and circadian rhythms influencing even molecular activities.

With that in mind, prioritize your circadian rhythm health. Keep regular hours for sleeping, waking, eating and physical activity or exercising. Practice good sleep hygiene and build those regular meals from healthy, whole foods. Make sure to get enough natural light exposure throughout the day, making a special point of getting some of that bright morning light each day.