Is Insomnia Inherited? How Genes Control Your Sleep

Many of us suffer a sleepless night here and there, but the problem is more pervasive for people who suffer from insomnia. Insomniacs may go weeks or even months without getting a decent night’s sleep, leaving them fatigued, depressed and even at higher risk of serious diseases such as cancer. Despite a high prevalence of insomnia, modern medicine has few effective treatments. However, new research suggests that a very particular set of genes may be behind insomnia. Could this knowledge help to develop new treatments?

All living things have a circadian rhythm. A very specific set of genes control our circadian rhythms, determining when we sleep, how long we sleep and other factors. Because our genes are so involved in circadian rhythm, it is no surprise that many aspects of sleep appear to have a heavy genetic basis. 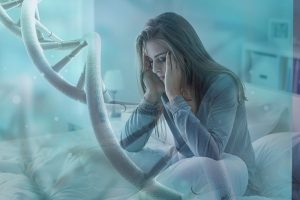 One of the first studies to find a firm genetic basis for sleep was published in 2016. Researchers looked at a family of mice that had very unusual sleep behavior. They had extreme amounts of wakefulness, a higher ratio of non-REM sleep and a great deal of muscle activity during sleep. The mice with this sleep disorder were all found in genetic testing to have a gene variant called Nalcn. This mutation affects areas of the brain that control REM sleep.

Similarly, researchers looked at families of mice that slept far more than usual and had extended periods of REM sleep. These mice were found in testing to have a mutation in the Sik3 gene, which controls the overall length of sleep.

Although this research was important in establishing a genetic basis for two common sleep disorders, it merely raised more questions. Could people have these same gene mutations with the same results? Is insomnia inherited in humans? Even more importantly, how could this knowledge be used to improve our health?

Is Insomnia Inherited? These Genes May Control Your Sleep

The military recently conducted a study to look at genes, lifestyle factors and the ways that these affect the health of soldiers. More than 33,000 members of the Army submitted DNA samples as well as questionnaires about their health and habits. The connections made between certain genes and specific conditions were then cross-referenced with other studies.

Researchers found that people with a specific mutation on the seventh chromosome were much more likely to have insomnia. This gene, called RFX3, appears to contribute to sleep habits in several ways. When it is mutated, people understandably struggle to get the sleep that they need.

However, mutations in the RFX3 gene are not linked solely to sleep disorders. People with disorders in this gene also have a significantly higher risk of diabetes and major depression. Both of these diseases have been linked to insomnia in the past, although this is the first gene discovered that contributes to both factors.

Although the RFX3 gene contributes to insomnia, not all people with the mutation will develop a sleep disorder. In addition, the rates of insomnia are steadily increasing, suggesting that heredity is not the only factor in how people sleep. The increase in stress appears to be a factor that is contributing to modern sleep disorders. In addition, the presence of lights, even throughout the night, appears to hinder melatonin production and thus interfere with sleep.

Sleep is affected by a variety of factors, so it makes sense that sleep disorders are also multifactorial. This makes developing an effective treatment a very complicated task. Because sleep medications can cause dependency and have side effects, many people avoid them. However, there are a variety of natural approaches that can help people to sleep better at night.

Insomnia appears to be at least partially in your genes. However, this does not mean that there are no effective treatments for sleep disorders. There are many natural ways to get the solid night of sleep that you need to live a healthy and happy life.

If you or a loved one are struggling with insomnia, it is important to maintain a sleep-friendly lifestyle. This is known as practicing good sleep hygiene. Maintain the same bedtime and waking time every day, even on weekends, to get your circadian rhythm on a solid schedule. In addition, it is important to control light levels. In general, all screens and lights should be turned off about an hour before going to bed. During the day, on the other hand, you should try to get plenty of exposure to bright natural light. If these measures are not enough, consider taking a melatonin supplement at night. These often can help people to fall asleep without the grogginess and other side effects of other sleep medications.