Sleep disorders are common in children and becoming more prevalent almost by the year. Many families struggle to help their children get the quantity and quality of sleep that they need for optimal development. What is causing the rise in child insomnia? According to new research, the sleep habits of the mother may be an important contributing factor to a child’s sleep patterns.

A Child’s Sleep: The Final Frontier

Many parents of newborns are reassured that their sleepless nights will soon pass. However, for numerous pa, ents this promise takes longer than expected to materialize. Even when put to bed at a reasonable time, some children remain awake for hours. Others fall asleep quickly but struggle to stay asleep. The result is that around 27 percent of children do not get the sleep they need, while their parents also do without slumber. 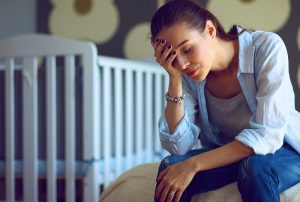 This lack of sleep will likely have a huge impact on future generations. Children who do not get enough sleep have lower motivation, memory and cognitive skills, which can lead them to fall behind in both developmental and academic areas. Sleep also can have a measurable impact on behavior, with sleep-deprived children showing higher levels of impulsiveness and hyperactivity. Sleep deprivation also can have a huge and negative effect on growing bodies. Children who do not get enough slumber have higher rates of obesity as well as a higher risk of metabolic disorders.

What is causing this epidemic of pediatric insomnia? There are likely many causes. According to new research, maternal sleep habits may play an important role.

Researchers in Switzerland and the United Kingdom compared the sleep habits of almost 200 children and their mothers. Information was collected both from parents and from EEG readings taken while the child slept. Parents also were asked to rate their levels of insomnia.

The results were surprising. While paternal sleep habits appear to have no correlation to a child’s sleep patterns, there was a strong link to the sleep habits of the mother. Mothers who reported higher levels of insomnia were more likely to have children who struggle to fall asleep and stay asleep. The children also were found on EEG to spend more time in light stages of non-REM sleep rather than the more restful deep and REM stages.

Researchers acknowledge that this link may not be as clear-cut as it seems. There may be additional causes that contribute to a loss of sleep in both mothers and children. For instance, family stress and domestic strife can impact the sleep of both parents and children. Mothers who struggle from insomnia also may be more lax or more strict about bedtimes. More research will be needed to determine the exact nature of this correlation.

Because child insomnia is a growing problem, a great deal of research is being done to determine causes and treatments. While medications were once the first line of treatment for sleep disorders in children, these can have side effects that impact other areas of a child’s health and development. Scientists now believe that behavioral interventions are the best answer for most cases.

Exactly what interventions can make a difference for children? According to scientists, the following measures may make a meaningful difference:

Is Your Child Getting the Sleep He or She Needs? 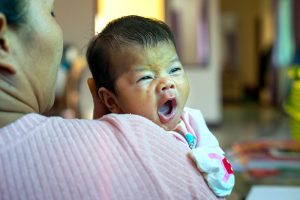 Children need much more sleep than many adults realize. According to sleep experts, newborns need to sleep around 16-18 hours a day, an amount that slowly lessens throughout children until the adolescent years when an average of nine hours is sufficient. However, sleep needs vary even between children of the same age. You can tell whether your child is getting enough sleep from their behavior. Sleep-deprived children will have symptoms such as:

Moreover, parents should suspect a sleep disorder if a child older than infancy is causing their caregivers to lose sleep. A child who experiences these issues should be evaluated for sleep disorders by a medical professional so appropriate behavioral interventions can be considered.

Getting enough sleep is a challenge for both adults and children in the modern world. Although the proposed link between maternal sleep habits and child insomnia is important, it is more important that we take lack of sleep in general seriously in both children and adults. Sleep is crucial to good health and should not be neglected in people of any age.