A new study has found sleep deprivation enhances cravings for junk food, possibly explaining the link between obesity and insomnia.

Many people are familiar with the term “munchies,” describing the increase in appetite when one uses marijuana or cannabis products. According to new research, a lack of sleep may set off similar behavior, leading to weight gain and even obesity over a long period of sleep deprivation.

The molecules that cause the increase in appetite associated with marijuana use are called cannabinoids. Our body makes a similar molecule, called endocannabinoids, in smaller amounts. Endocannabinoids have a similar effect as cannabinoids, making people fatigued with lower memory and cognitive skills. In addition, they can cause the munchies.

Like most hormones, endocannabinoids have a circadian rhythm. Levels increase throughout the day and peak in the early afternoon, then steadily become lower before hitting a low while we sleep. When people are sleep deprived, a higher amount of these hormones are made, so that the peak is much higher. This has the potential to increase food cravings, especially for junk foods and snacks. 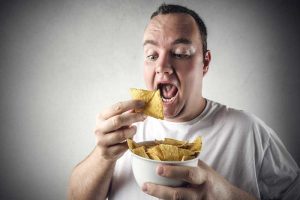 In a recent study, not only did participants show higher levels of endocannibinoids while sleep deprived, but they showed a huge preference for certain types of foods. Despite having eaten a full meal two hours before, they accepted snacks when these were offered. Instead of choosing healthier snacks, they chose cookies, chips, and other less healthy foods. Participants who were not sleep deprived showed more moderate snacking behavior and healthier food choices.

Sleep deprivation has been associated with poor food choices, weight gain and obesity in the past. However, researchers were at a loss as to the actual mechanism causing this behavior. How could sleep influence not just hunger, but the type of foods a person craved? Increasing levels of hormones that cause the munchies offer a partial explanation.

Poor Choices Over Time Add Up

Eating a bag of chips one day won’t cause obesity, but making poor choices over a long period of time can definitely contribute. Because many Americans are chronically sleep deprived, they may be making poor choices on a regular basis that can add up to weight gain and even obesity. Currently, 35 percent of American adults are obese and that number is growing every year even as we become more health conscious as a society.

If you are struggling to lose weight, getting adequate sleep may help your cause. Not only could this reduce your cravings for unhealthy foods, but it could help your health in a variety of ways. Getting enough high quality sleep has been proven to contribute to good health, including healthy weight, lower disease risk and even better mental health. Now more than ever, people need to make healthy sleep a priority in their lives.