According to a recent study, sleep deprivation may affect your insulin sensitivity. Additionally, your blood sugar levels may also wreak havoc on your overall biological rhythms.

Everyone on Earth has an internal clock that tells us when we should sleep and when we should wake. Known as the “circadian rhythm,” it is a biological and self-sustained process that takes its cues from the environment around us. This new study suggests that our circadian rhythm may have a huge influence on our sensitivity to insulin.

November is American Diabetes month, so it comes as no surprise that more and more researchers are focusing on ways to treat this common condition. Insulin sensitivity simply means that the body becomes resistant to insulin, which is necessary for maintaining normal levels of blood sugar. When we become too resistant to insulin, our bodies must produce more of it in order to break down and process sugars. This may eventually lead to type 2 diabetes, a condition in which the insulin response process is impaired and blood sugar levels climb out of control.

According to the American Diabetes Association, nearly 28 million people in the United States alone suffer from type 2 diabetes. It remains the seventh leading cause of death in the United States, so researchers and medical professionals work hard to discover new ways to treat and prevent it. For awhile now they have known that sleep deprivation and a high-fat diet are two of the most prevalent causes of insulin sensitivity. This new study provides some insight into which of these factors has the greatest influence on that sensitivity. 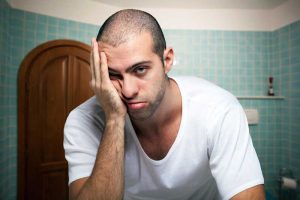 Josiane Broussard, PhD, conducted a study at Cedars-Sinai Medical Center in Los Angeles, CA along with her colleagues to discern whether a high-fat diet or sleep deprivation had a larger effect on insulin sensitivity. The subjects were eight healthy male dogs.

What the Study Means for Humans

Broussard’s study shows that a single night of sleep deprivation can have a larger impact on insulin sensitivity than a full six months on a high-fat diet. For reasons still unknown, it would seem that people who consume high-fat diets do not suffer from increased insulin resistance due to sleep loss. For now, these results are enough for Dr. Broussard to call for even more research on how and why sleep deprivation has such a tremendous impact on glucose tolerance. With this information in mind, it is possible to deduce that a disruption of the circadian rhythm may be a precursor to type 2 diabetes.

It is clear that chronobiology plays a very large role in our overall health, but with this recent study suggesting that a lack of sleep may cause insulin resistance, even after a single night, it just goes to show the importance of getting enough sleep and maintaining a healthy circadian rhythm.