New research suggests that osteoporosis may soon be added to the long list of chronic diseases linked to sleep deprivation and other sleep disorders.

Osteoporosis is one of the most common and debilitating diseases of old age. Around half of elderly women and one-quarter of elderly men will suffer a broken bone from this disease at some point in their golden years. While there are many new and innovative treatments for this disease as well as its precursor, osteopenia, it nonetheless affects the mobility and health of millions every year. New research suggests that this disease may actually be linked to long-term sleep deprivation.

How common is sleep deprivation? Many people experience this for months on end as new parents; others lose sleep routinely due to education or career. For some, a circadian disorder is a reason for a long run of sleepless nights. Regardless of the reason for your sleep deprivation, new research proposes that it may be keeping you from building strong bones. 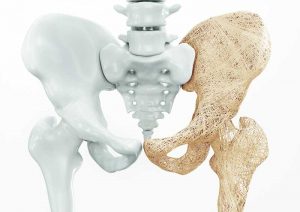 Bones are constantly being broken down and rebuilt to maintain optimal strength and density. This process involves a series of steps that release markers into our bloodstreams, including one called P1NP. Researchers measured the P1NP in the blood of men who slept normally and those who were sleep deprived in a lab, allowed only four hours a night of shut-eye. The men who did not get as much rest had much lower levels, indicating less bone formation. This effect was especially notable in younger men, who had a 28 percent decrease in this marker and thus likely bone strength. In addition, markers for bone breakdown remained just as high, indicating that bones were being broken down without the rebuilding process. The lack of rebuilding in bones over time leads to weaker bones, which we call osteopenia, and even osteoporosis.

This is not the first study to find a link between sleep disturbances and osteoporosis. A 2016 study found that mice who were exposed to constant light developed irregular circadian rhythms and, later, osteoporosis. However, this is the first study to demonstrate a link in humans. Why are researchers so concerned about higher rates of osteoporosis? Despite the latest medical technologies and wide availability of calcium-rich foods, the prevalence of this disease in the elderly is high and still climbing. The costs of this disease, both financial and human, are high.

People who have osteoporosis suffer from more porous bones than they should have. Thus, their bones are not as dense or as capable of withstanding the challenges of daily life. People with this disease find that their bones break with very small amounts of stress or even for no reason at all. In fact, this disease causes around three million fractures and more than $25 billion in medical bills every year in the U.S. alone. There are several known risk factors such as using certain medications and being diagnosed with certain diseases. In addition, it appears that having a disrupted sleep cycle may be a risk factor as well.

If you want to avoid osteoporosis, there are several lifestyle changes that can make a meaningful difference in your bone strength and density. This study suggests getting enough sleep, but you also can try:

Keeping your bones strong and healthy is essential to leading a long and healthy life. However, this new research in chronobiology suggests that there is more to accomplishing this than simply drinking more milk. Keeping a balanced circadian rhythm is a crucial lifestyle decision that can have immense effects on both your long-term and short-term health.