The midnight snack is almost an institution of American life, with many people succumbing to a nighttime raid of their refrigerators and freezers. However, new research suggests that these after-hours snack attacks may be linked to poor sleep.

Can Eating Before Bed be Bad for You?

Eating late at night can interfere with sleep in a variety of ways. First, people who are reaching for a late night bowl of ice cream could and probably should be using that time to sleep instead. Second, carbohydrate metabolism and insulin release are slower at night, which means that there may be more blood sugar spikes if the foods eaten are high in sugar or simple carbs. Nighttime eating also can exacerbate reflux, heartburn and other digestive disorders that interfere with sleep. If the food or drink contains caffeine, as with chocolate and some teas, then this also may interfere with the circadian rhythm and prevent the snacker from getting a good night of rest later. 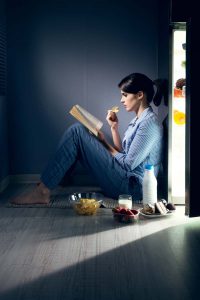 The all-nighter is common in Western culture, with college students and professionals alike using those quiet nighttime hours to catch up on work not completed during the day. In many cases, these late-night study or work sessions are accompanied by a snack. However, eating late at night may actually exacerbate the symptoms of sleep deprivation, leaving these people even more affected by the attention deficits, lack of coordination and memory loss that accompany a lack of sleep.

Researchers at University of Pennsylvania’s Perelman School of Medicine studied the effects of nighttime eating on sleep deprived people. 44 people were allowed to sleep just four hours per night. Half were given unlimited access to food during their night wakefulness while others were restricted to water. All participants were given cognitive and psychological tests at 2 a.m. By the fourth night of this sleep deprivation, the subjects who were allowed to snack showed poorer performance across the board, including in memory, attention span and reaction time compared to the people who drank only water at night.

Sleep and Your Metabolism

The urge to snack at night can have unfortunate consequences for people who give in to their cravings. Not only does nighttime eating contribute to a lack of sleep, but it also contributes to obesity. Poor sleep is linked to a lower metabolic rate, which combined with the additional nighttime calories contributes to obesity and the health problems associated with an unhealthy weight. Researchers in circadian biology suggest that people who are sleep-deprived should be eating fewer calories due to a lower metabolic rate, but many night owls are actually eating an average of 500 calories more every day. 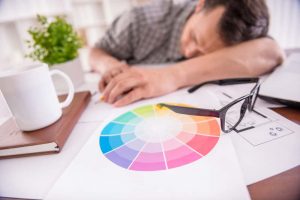 While it is never fun to go through a day exhausted, personal comfort is not the only thing affected by a lack of quality sleep. Researchers in chronobiology have found that a lack of quality sleep is linked to a variety of serious health disorders including cancer, heart disease and diabetes. In addition, the Centers for Disease Control warn that insufficient sleep is actually a public health concern, in part due to higher rates of vehicular and industrial accidents in people who are not well-rested. Maintaining a healthy circadian rhythm is essential to good health.

The next time you feel a late night craving, it may be better to simply go to bed rather than indulging. While more studies of the effects of nighttime eating on circadian rhythm are needed, it appears that nighttime eating may contribute to poor sleep, which contributes to poor health.