So What Is Non-24 Hour Sleep Disorder?

Do you have trouble falling asleep or waking up? Some people suffer from a syndrome called non-24 hour sleep disorder—many without even realizing it.

The Circadian Rhythm and Sleep

Your circadian rhythm refers to your innate light-dark cycle, governing not just sleep and wakefulness, but also cell repair, metabolism and a variety of biochemical processes. Most people have a circadian rhythm that is around 24.15 hours, roughly matching with the length of our days. This allows us to sleep and wake in tune with the natural cycles of our planet.

Having a circadian rhythm that is not 24 hours is more than an inconvenience. People with a circadian rhythm that is not 24 hours suffer from a variety of problems beyond the simple inability to sleep. They can be tired constantly, yet unable to sleep when it is time. This leads to a variety of symptoms such as sleeping at odd hours, fuzzy thinking, depression and learning difficulties. These people also may have less responsive immune systems and be more susceptible to diseases associated with a lack of quality sleep such as heart disease and diabetes. This disorder is especially common in people who are completely blind, as these people cannot sense light and attune their circadian rhythms to light-dark cycles. In fact, 70 percent of people who are totally blind have it. However, a small number of sighted people also have it. 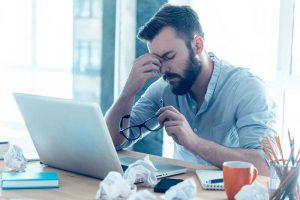 Non-24 hour sleep disorder affects up to 70 percent of people who are completely blind. This is due to the effect of light perception on our circadian rhythm. When the retinas of our eyes sense light, they send a message to a “clock” in our brains called the suprachiasmatic nucleus of the hypothalamus. This tiny part of the brain then signals the pineal gland to halt melatonin production and increase release of hormones associated with alertness. When our eyes do not perceive light, this process is shut down entirely. There is no way for the brain and body to synchronize with the external world.

Despite this disorder being extremely common in people with complete blindness, it is often misdiagnosed. People suffering from this disorder are often assumed to have depression, ADHD, fibromyalgia and other chronic diseases because these effects of poor sleep mimic these disorders.

While there is no cure for this disorder, many promising treatments have been found by chronobiology researchers. Melatonin supplements are often helpful in allowing people to sleep at the right time. If a person is not completely blind, light therapy also may help. In addition, there is a new pharmaceutical drug called Hetlioz, or tasimelteon, that is showing promise. This drug is a chemical that mimics melatonin and may be effective at treating this sleep disorder as well as jet lag. This drug is not for everyone due to side effects such as depression, but it may help many people to get the good night of sleep they need.

Living out of sync with our natural environment means never getting a good night of sleep. Researchers are currently studying non-24 hour sleep disorder to better understand this disorder and find new innovative treatments to mitigate its negative effects.