Peeling the Layers off of the Workings of the Master Clock

Research suggests that an enzyme named glycogen synthase kinase 3 may be an important regulator of your brain’s master clock.

Do you feel more alert at certain times of the day? Whether you are a morning lark or a night owl, most of us have set times when we feel like we are on top of our game. This daily burst of energy is not a coincidence, but rather a function of your internal master clock. We are primed to have more energy and clearer thinking at certain parts of the day while feeling more sleepy and sedated at others. The cells and proteins that make up the suprachiasmatic nucleus of the brain regulate this individual daily cycle.

What Is the Suprachiasmatic Nucleus?

Coordinating your physiological activity with cues from the external world is a complicated task handled by a small part of your brain’s hypothalamus called the suprachiasmatic nucleus. This tiny organ is made of just 42,000 neurons that receive signals from the retinas of your eyes and communicates the information it receives to the corresponding areas of the brain. The suprachiasmatic nucleus, or SCN, has rhythmic pulses of activity that function as the ticking of your body’s master clock, cueing other parts of the brain and body to release hormones and other biochemicals that coordinate the sleep-wake cycle.

How are electrical activity and hormones coordinated? Like other parts of the brain, the SCN has a number of proteins that regulate its function. Recent research points to an enzyme called GSK3, or glycogen synthase kinase 3, as one of the most important “gears” of your master clock, acting as a coupler between electrical and biochemical impulses.

GSK3 and Your Sleep-Wake Cycle 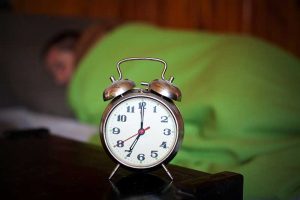 When SCN cells are kept alive in a Petri dish, they exhibit distinctive cycles of high and low activity. These cycles follow a roughly 24-hour interval, or circadian rhythm. When in your brain rather than in a laboratory, the cells of the SCN still exhibit a circadian rhythm, but they also adjust activity according to cues from the outside world, such as light. Glycogen synthase kinase 3 appears to regulate this activity. It alters the magnitude of sodium flowing across the nerve cell membranes of the SCN. This flow of sodium, called the persistent sodium current, has increased sodium ions during the day that cause the SCN nerve cells to fire rapidly, creating a barrage of electrical impulses. At night, a decline in the number of sodium ions occurs and activity in the SCN subsequently decreases. GSK3 appears to be regulated by biochemical messengers, which is an important connection between the hormonal and electrical signals that comprise your brain activity.

Chronopharmacology, GSK3 and Setting the Time on Your Master Clock

New chronobiology research on GSK3 may have important implications in the treatment of human disease. GSK3 is the protein targeted by several common drugs. These include lithium, a common treatment for bipolar disorder, as well as riluzole, which is used to slow the progression of ALS or Lou Gehrig’s disease. These drugs are also sometimes used to treat severe cases of depression, anxiety and other mental illnesses.

Because GSK3 has changes in activity over a 24-hour cycle, there is a good chance that it may be more effective to take drugs acting on this enzyme at certain times of the day. Timing medications so they can be more effective and have fewer side effects, a practice known as chronopharmacology, is becoming increasingly common. Modern research has shown that chronopharmacology can affect the treatment of diseases as diverse as hypertension and breast cancer. People taking drugs that act on GSK3 may get more therapeutic effects along with fewer side effects if they take these medications at the right time.

Our SCN is a tightly controlled master clock that helps regulate the activity of every cell in our bodies through a complex set of electrical and biochemical gears. Research that reveals more about these gears and their functions can be used to more effectively treat devastating diseases and to improve overall health. The next time you feel like you are alert, energetic and on top of the world, you likely have GSK3 and other circadian proteins to thank.