Most people have heard of seasonal affective disorder, or the winter blues. However, some people experience similar symptoms in warm weather months. Researchers are investigating reverse seasonal affective disorder, or summertime depression, in more detail. New studies in chronobiology suggest that there is a very real biochemical basis for this common health problem.

The Link Between Summer and Depression

Professor of psychiatry Dr. Alfred Lewy at Oregon Health and Sciences University in Portland, Oregon believes there are two links between summer weather and depression: one is related to humidity and temperature and the other to sunlight levels. This observation is borne out by doctors at Georgetown University Medical School and University of Pittsburgh School of Medicine.

While many people have observed that they felt more depression in summer months, this was long ignored by researchers until the issue was studied by those who themselves experienced mental anguish as a result of relentless summer sunshine. However, researchers estimate that 4 to 6 percent of the population suffer from reverse seasonal affective disorder.

How Can Summer Cause Depression? 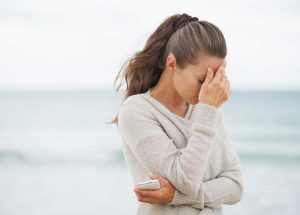 As Ellen Frank, professor of psychology and psychiatry at University of Pittsburgh School of Medicine says:

“I always felt kind of yucky and listless in the summer and full of energy in the winter.”

Too much sunshine, according to researchers in circadian biology, may lead to deficits in melatonin. People who need higher levels of dark to produce this hormone, which is essential for quality sleep and good cognitive function, may suffer in the summer when the sunshine lasts until late at night.

Melatonin is created and released by the pineal gland when the suprachiasmatic nucleus of the hypothalamus puts out signals in response to a lack of light. However, too much light can prevent the brain from making enough melatonin for healthy sleep patterns, causing a variety of unpleasant symptoms.

The symptoms of summer depression extend beyond trouble sleeping. Because melatonin dictates a variety of biochemical processes, these people may suffer from weight loss or gain, anxiety and depression and loss of appetite in addition to the difficulties with sleep.

In addition to problems in building high enough melatonin levels to sustain healthy sleep, summer also presents another major challenge to the circadian rhythm: changes in schedules. Building healthy routines is one major approach to treating depression because it helps to normalize neurochemicals such as melatonin and serotonin that support healthy brain chemistry.

In summer, children are home from school, vacations are taken, and many people adjust work schedules or take time off to enjoy the warm weather. This can disrupt eating schedules, sleep schedules and other important schedules that help to cue melatonin production in the body. This can create depression and a variety of symptoms. 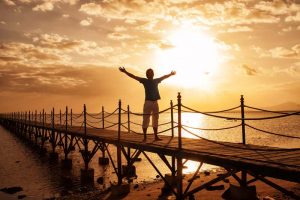 Several doctors are suggesting that the cure for summertime depression may be simple: watching the sunrise. Most of the hypotheses center on the effect of light on circadian rhythm, or our internal 24-hour clocks. The phase shift hypothesis holds that light and dark cycles fall out of rhythm when day and night are not perfectly attuned to a person’s internal clocks, as is the case in summer when sunrise occurs early and sunset later.

Light therapy at the correct time of day, such as at 5:45 a.m., may reset this circadian rhythm to a healthier rhythm and alleviate many of the symptoms of this disorder. This may put an end to summer depression. In addition, getting up early to see the sunrise may help many people to keep a more stable schedule in the summer.

Depression, seasonal affective disorder and other mood disorders can be difficult to treat. However, research in chronobiology is helping doctors to more effectively treat patients with these and other health problems. In many cases, common sense and cost-effective treatments such as watching the sunrise can help people to feel better and enjoy the warm weather months.